Wickham Festival organisers are to stage a one-off drive-in concert starring Show of Hands after being forced to postpone this year’s main event.

The four-day festival was scheduled to take place from August 6-9 but was put back 12 months because of the Covid-19 pandemic.

But organisers have defiantly vowed “The Show Must Go On” and will now put on a special event with Britain’s top acoustic music duo Show of Hands. 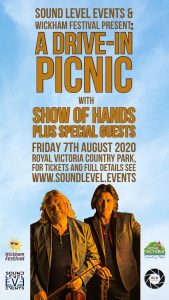 They will be appearing at Netley’s Royal Victoria Country Park on Friday August 7, the day they were due to headline at Wickham Festival.

In order to comply with government regulations, the concert – presented by Soundlevel Events in association with Wickham Festival – will be a drive-in show with space for 150 cars containing up to four people at a cost of £50 per vehicle.

Cars can arrive from 6pm and the show starts at 7.30pm. Click here to book tickets. Although there will not be a bar, people can bring their own food and drink and sit alongside their vehicles. Indoor toilets will be available.

Wickham Festival organiser Peter Chegwyn said: “We were desperately disappointed that we had to postpone this year’s festival as we really felt we could get it on safely. But we don’t give up easily.

“We won’t allow ourselves to be beaten by this virus. We know a lot of people are desperate to enjoy live music so we are offering something a bit different.

“Show of Hands have been one of our most popular acts for many years and would have been headlining our Friday night. It is just now it will be as a two-piece at a different venue and with a rather different atmosphere!

“It will be completely safe and socially distanced so we are hoping for a big crowd to enjoy what will be a memorable night out. We expect it to be a lot of fun, the kind of event to say: ‘I was there!’

“Although there have been other drive-in concerts, as far as we know we are the first festival to do something like this – and it will be interesting for us to try staging an event at a new setting.

“Our loyal following will also be able to support us via a Crowdfunding page. Like all festivals and the rest of the arts, we have been hit financially by the pandemic so we are hoping our fans will help us in these difficult times.”

Show of Hands frontman Steve Knightley is backing the appeal and is delighted to be supporting a cause which means so much to him.

He said: “The Wickham Festival is a wonderful event and one which has had a very special place in our hearts for many years. We are delighted to help out and I really hope people support it through these tough times.

“We are very excited to be asked to perform. We have never done a drive-in show before so it will be a unique event and we are determined to make it very special.

“We were due to be headlining at Wickham that night and although the atmosphere will be a bit different, it is great that the show will go on. We are going to make it a lot of fun.”

The entire four-day scheduled programme has now been rolled over to next year (Aug 5-8) when Van Morrison will be headlining alongside Show of Hands and the Waterboys.