Saturday headliner Frank Turner will be signing copies of his new book at WH Smith in Winchester on Friday March 22 at 12.30pm.

The Wessex Boy will be meeting fans and autographing his second book “Try This At Home.”

Around 300 people are already expected for what is proving a hugely popular session. Click here to reserve tickets. 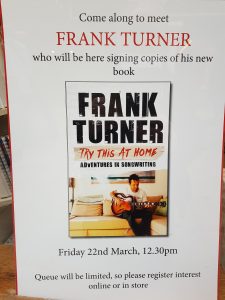 Tickets cost £5 but that is redeemable against the price of the book.

It is a great chance to meet the singer-songwriter and to get in the mood for what is sure to be a fantastic show on August 3.

There has been a huge buzz since we announced Frank Turner will be headlining the Saturday night at this year’s festival.

Ticket sales have soared with people eager to see what will effectively be a home-town gig for the popular artist.

Turner, who grew up in Winchester, is now one of the biggest names on the rock circuit having played at the Opening Ceremony for the London 2012 Olympics as well as selling out some of the biggest arenas in the country.

One of the hardest-working artists around with more than 2,300 gigs to his name, he has just concluded a sell-out nationwide tour including the 6,000-capacity Bournemouth International Centre.

Amazing team you have. See you next year!👊

Such a blast, I was so sad to leave.

Looking forward to next year

Mother Nature will replenish the site ready for next year

The men they couldn’t hang , they were fantastic 👍well done to all that volunteered and organised it . Truly a brilliant festival loads of highlights. 👏🏻

A lovely weekend. Normally at the end of a festival I am ready to go home, but this time I could happily have stayed a few more days. Best set for me was perhaps the Waterboys, new discovery was the Slambovian Circus of Dreams, with Will Varley a close second. Fabulous weekend, thank you. As for who I'd like to see next time -- anybody new. A few old favourites is good but I'd rather discover new artists.

Highlights: Spiers & Boden, The Undertones, Cut Capers, Spooky Men (and workshop), Dhol Foundation, SofH; others in my party loved Ferocious Dog (clashed with SofH so didn't see). Missed: The Quay West Stage and Tankus The Henge Next Year: all of the above please; I second requests for Peatbog Fairies & Talisk; Bellowhead (hopefully a successful Novemeber tour will persuade them to do a festival circuit) and Richard Morris - who we discovered on the Quay West stage and our whole family loves and why that stage is so important!

Re-live the memories of a wonderful Wickham weekend. Thank you to MGTracey for this super video www.youtube.com/watch?v=_2Vq7zoxU3g ... See MoreSee Less

Magnificent weekend. Already sent off for next year.