We’ve just uploaded all our stage times here on Clashfinder to help plan your visit.  This is a printable timetable where you can see what is happening on all stages at the same time.  You can highlight acts you’re interested in seeing and much more.  Instructions are provided here.  As many of you know you’ll always leave Wickham Festival having discovered new artists, often from the local area.  We’ve even added stage times for The Twisted Tearooms so you really have everything all in one place 🙂 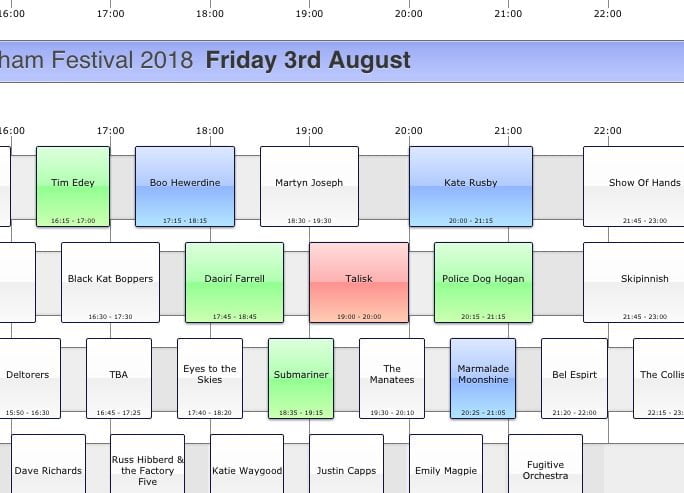 Please head on over to Clashfinder and get planning!  To give you a taste of what to expect this year, here are some acts to watch out for in The Quay West Cave…

Marmalade Moonshine are a Rock & Roll band originating from Portsmouth that are a force against commercial pop music with their Britpop influenced music.  Their music is all original and heavily inspired by sounds from Oasis, Arctic Monkeys and The Beatles. Although not a fan of the phrase they’re often labelled as “Indie Rock”, but in their own words just think “Liam Gallagher style!”

Richard Morris is a nomadic surf instructor who grew up learning to surf and play guitar on the Isle of Wight. His rugged blend of gritty rock and soulful pop hooks form the addictive sound he is known for. His 2017 ‘Stay Alive’ EP propelled him into the limelight and he was crowned “BBC Introducing Artist of the week” shortly followed by “Best Unsigned Male” in the 2017 Best of British Unsigned Music Awards. His music has been aired on all 40 BBC radio stations and his healthy south-coast fan base have championed his success selling out venues across the UK. Appearing at major festivals and venues across the UK his crowd pleasing performances have seen him open for some of the UK’s top touring bands such as Little Comets, Rationale, Flyte and Guvna B.

The Collision are a young Indie Pop/Rock band from Portsmouth, UK that formed in 2016. They released their debut EP Never Gone in November 2017 to rave reviews and have a strong local following that have allowed them to play headline sell out shows at The Wedgewood Rooms in Portsmouth and The Joiners in Southampton as well as festivals such as Common People and Victorious on the South Coast.

Nice write-up in The News today. Now the Govt. have announced festivals can happen from late June onwards, Wickham tickets are selling fast! Save £60 on every 4-day adult weekend ticket if you buy now via www.wickhamfestival.co.uk/tickets
www.portsmouth.co.uk/business/festival-fans-snap-up-tickets-in-wake-of-prime-ministers-announceme... ... See MoreSee Less

WITH events looking like they will return in the summer, festivals such as the Wickham Festival have excitedly confirmed their line-up and promoted their tickets.
View on Facebook
·Share

Looking forward to the festival - but I'm concerned about the risk with so many people so close together. As the government is suggesting that all restrictions could be lifted by then, there could be a lot of people, without masks, much closer together than 2 metres. Given your festival goers tend to be older people in the main, I'm keen to know what steps you may be taking to ensure safety. Are you able to reveal anything yet? Thanks!

Are you accepting people that are unvaccinated and know they don't need the vaccine?

Phew just in time then maybe

Gill Swatridge Ade Swatridge I've got ticket but I dont think I'll be able to be mixing with people by then....😪😪😪😪 Think I have to be at least 1 year post transplant 😪😪

Great News! Thanks to the Govt. saying they intend to allow festivals from June 21 with no restrictions, this year's Wickham Festival will go-ahead as planned. Book now and save £60 on every 4-day adult season ticket. www.wickhamfestival.co.uk/tickets ... See MoreSee Less

Hooray! Rolled over my tickets from last year, just booked hotel for the 3 nights! Now I have to hope Jelly Belly Bean shop in Wickham is still trading!

How do you get information on having a trade stand?

Best news this yr. Have so missed live music. Have my tickets from last yr safely put away.

Can we roll over to next year if we can't go?

Have you got covid safety restrictions in place? X

Spent most of last march and April in hospital with covid and have been isolating ever since. You have no idea how much I am looking forward to this.

Fantastic news ........if Leo Sayer can’t make it .......maybe worth asking The Undertones or The Members to replace him .

Brilliant, I love Show of Hands and Liza Carthy.

Is Leo Sayer not playing now?

Is it £60 off the advertised price or is already deducted?

Excellent news! Bought tickets last year and have been keeping fingers crossed that it goes ahead. Can’t wait to see the SAS band again 😁

I really hope this goes ahead - been waiting so long & such a fantastic line-up!

Is there any way of upgrading a day ticket to the full weekend?

Love Eddi Reader, which day will she be there?

To get the saving to buy the 4 day adult season ticket do I click on tier 3 weekend plus Thursday plus Friday as I can’t see the season ticket as a one off. Am I being thick?

Cracking new video from Edward II. Their album 'Dancing Tunes' is being released on March 12. Edward II will be appearing at Wickham on Sunday 8th August 2021.
www.youtube.com/watch?fbclid=IwAR0c707_EyVEk37mvyP6JrqaZzfcqDUTGvIqqx4nsI88XL8TBDn-8VJt5fw&v=Hi2i... ... See MoreSee Less

Thanks for posting Peter ... I hope your festival goers will share this link with their friends ... See you in August

Pre-orders for the new album from www.edwardii.co.uk

Lovely photographs to accompany the song too

You've done it again Oysterband, a song for our times 💚 xx

Really enjoyed watching this tonight. Thank you Wickham and Breabach! Our kids loved it too.