With a repertoire which ranges from traditional Georgian music to Abba, the group of Australian singers usually ranges from 12-16 singers according to availability and guests. With their unique brand of humour and musical style, these Wizards of Aus always cast a spell on fans.

The Spooky Men’s Chorale were created by Stephen Taberner and made their first appearance in August 2001 as part of an evening called “This was nearly my life” at Paddington Uniting Church, Sydney. Taberner claims he called up every man he knew who could sing and “taught them 3 songs, and asked them to show up wearing black and with an interesting hat.” The three songs were “Vineyard”, a Georgian church song, “Georgia”, a mock Georgian original, and “The Mess Song”. The latter was an existential rumination on the aftermath of breakfast written by New Zealand’s Don McGlashan and Harry Sinclair of The Front Lawn.

In the first couple of years the group performed and rehearsed sporadically until the National Folk Festival of Easter 2004, held in Canberra, which effectively launched the group and where, thereafter, they became cult figures. The gig at the National was also the debut of what would become the Spooky theme song (“We are the Spooky Men, We dream of mastodons …”) which typified the brand of humour they were beginning to define. The attention received at the National Folk Festival in 2004 gave rise to a series of opportunities to put their music before a wider audience. They are now a staple at folk festivals. 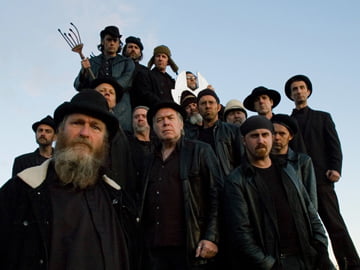