Jim Malcolm is the ultimate Scots troubadour. Travelling the world with his guitar, harmonicas, and engaging wit, he sings the traditional songs of Scotland and his own masterfully crafted songs in a style which is modern and accessible, yet utterly authentic. He is highly regarded as an interpreter of the songs of Robert Burns, and has been described as “one of the finest singers in Scotland in any style”.  Jim will be appearing on Thursday 2nd August and also on the Wednesday at our concert for early camper arrivals in the Community Centre at 21.00 – 21.45

Though he now works solo, Jim was lead singer with the world-renowned and multi-award-winning Old Blind Dogs for eight years, a fantastic experience with some of Scotland’s finest musicians, taking him to the most prestigious festivals in North America and around Europe. 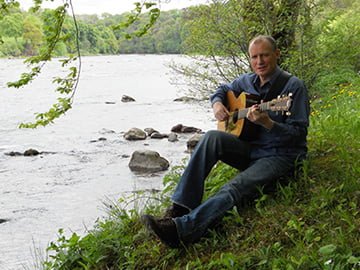