3 Daft Monkeys’ dynamic style of world-influenced folk music and infectious dancing rhythms will leave you breathless, enthralled and exhilarated.  The band members are:

After experiencing the band’s notoriously energetic live performance at Glastonbury Festival last summer, Mark Radcliffe declared them as one of his “Highlights of the Festival” on BBC TV coverage, and subsequently invited them to play a session on his BBC Radio 2 Folk Show. The band have also performed a live session with Whispering Bob Harris on Radio 2, after he experienced them ‘live’ at Cropredy Festival.

With their quirky and original approach to music, and their passion, intensity and sheer joy of life, 3 Daft Monkeys have gained themselves a large and loyal cult following, which is still growing rapidly due to their intense touring schedule. Their music is hard to pigeon-hole, mixing and crossing many musical genres from Celtic, Klezmer, Gypsy, Balkan, Latin, Ska, Dub Reggae, Indie, Rock and even a hint of Shostakovich.

Fascinating lyrics of personal and whimsical observations on life, and folk tales both ancient and modern, are told within the swirling layers of their music, all with the essential catchy sing-along chorus. Their latest story-led and theatrical album “Of Stones and Bones'(Best Album, Spiral Earth Awards) is a collection of old, new and fictional Cornish tales of forbidden love, murder, rebellion, witchcraft and piracy. All delivered with “panache and a wicked vein of humour”.

With a brand new 4-piece line-up, the band weave enchanting melodies with catchy choruses, virtuoso vibrant fiddle, rhythmic 12-string guitar, 6-string bass, bespoke hand-percussion and 4-part vocal harmonies. Their music leads you through a musical journey of the senses and emotions, and the desire to dance is irresistible.

3 Daft Monkeys’ famously intense and dynamic live shows lend themselves to venues of all sizes, and audiences of all ages and backgrounds. Their shows are individually tailored to suit their environment, from intimate acoustic story-led performances in small village halls and churches, to dynamic electric festival shows with a guest brass section and VJs. Their music has been used on Sky Sports Channel, BBC documentaries, and independent films, as well as by theatre companies such as the infamous Rogue Theatre.

3 Daft Monkeys have played at a huge number and variety of festivals in the UK and Europe, including Glastonbury, Fairport Convention’s Cropredy, Beautiful Days, Trowbridge Village Pump, Towersey Folk Festival, Cambridge Folk Festival, Belladrum, Bestival and Boomtown Fair. Their eclectic mix of styles has drawn them a following right across Europe, and the band have headlined festivals in Holland, Germany and France. 3 Daft Monkeys have also recently joined acrobats and circus performers in the new and vibrant boutique “busking festival” scenes of Switzerland and Italy.

The band are currently writing a fresh new set of songs for their eagerly awaited new album release in spring 2017. 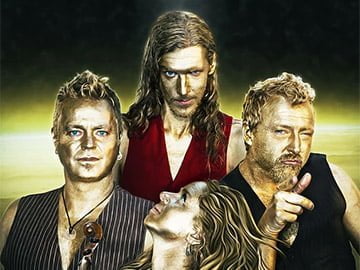