Levellers are still going strong after over 30 years in the game. They have long been, and still are, one of the best live bands around and in 2020 they released new studio album ‘Peace’ which entered the UK Official Album Charts at #8 – the band’s highest charting entry since 1997’s Mouth to Mouth reached #5 and improving on previous release We the Collective’s #12 position in 2018.

Over the years, Brighton folk-rock band Levellers have worn many masks; most self-made, some imposed upon them. But while their status has evolved over the decades, the basic humanity underpinning their music has remained constant.

The band are celebrating the 30th anniversary of their seminal platinum-selling, album Levelling The Land in 2021. During the summer of 1991 the album redefined the UK’s musical landscape.

Levelling the Land features the hit singles One Way, 15 Years and Far From Home plus The Game, Liberty Song, Sell Out, Another Man’s Cause, Riverflow, Boatman and the incendiary Battle Of The Beanfield.

The band consists of: 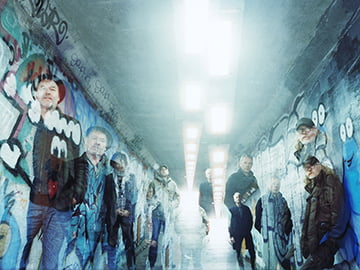