John Otway is an English singer-songwriter who has built a sizeable cult audience through extensive touring, a surreal sense of humour and a self-deprecating underdog persona.  Otway shot to fame on in the midst of punk rock and a gymnastic performance on The Old Grey Whistle Test.  Otway, ever the showman, decided to jump on to the amplifier of his colleague during a performance of Bob Lind’s Cheryl’s Going Home. (Un)fortunately for Otway, he misjudged his leap and sent Wild Willy Barrett’s amplifier tumbling as he crashed down straddling the box under the amp…

Despite numerous attempts to get back into the charts, Otway would have to wait 25 years for his next taste of chart success. In the intervening years, Otway would become an actor; write an autobiography (Cor Baby That’s Really Me: Rock and Roll’s Greatest Failure); perform sold out shows at London’s Astoria and Royal Albert Hall; make regular appearances at both Glastonbury and Edinburgh Festivals; and write the nation’s seventh favourite lyric of all-time (beating Bob Dylan and Paul Simon in the process).

In 2012, to celebrate his 60th birthday, Otway produced his debut movie titled Otway the Movie: The Story of Rock n Roll’s Greatest Failure. A screening for producers was held at London’s Leicester Square with the final scenes from the movie filmed on the red carpet and edited into the film. The film was then taken to Cannes Film Festival and a 50-date tour of cinemas in both the UK and North America. It was subsequently voted the 2nd best film of the year in a poll of its readers conducted by The Guardian newspaper. 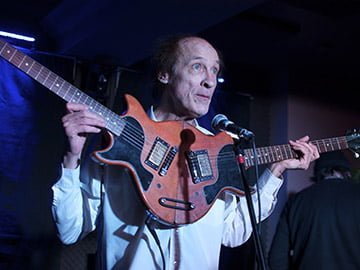