Naomi Bedford’s unique voice has long gathered support from all corners of the musical fraternity. Her emotive hybrid of plaintive British folk and high lonesome Americana has gained plaudits from such diverse artists as Peter Buck, Shirley Collins, Chris Difford, Linda Thompson, Iggy Pop and many others.

In a series of albums with musical partner Paul Simmonds (TMTCH), Naomi has forged a clear modern identity as both an interpreter and creator of folk song. Her last album Singing It All Back Home was a Guardian Folk Album of the Month and she is a previous BBC Folk Award nominee in Best Original Song category.

Her latest project, The Ramshackle Band, brings all her influences into a larger ensemble setting; a mix of Transatlantic Session and Country Fair revue. In the Ramshackle style, a rolling cast of musicians come together to create a vibrant celebration of both Bedford’s voice and the folk and country styles that she inhabits so authentically. 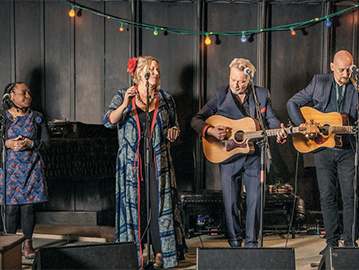