The Men They Couldn’t Hang

The Men They Couldn’t Hang came together in 1984 to perform at the alternative music festival in Camden town alongside the legendary Pogues and the Boot Hill Foot-Tappers. Paul Simmonds, Philip ‘Swill’ Odgers and his brother Jon, veterans of the Southampton based pop-punk band ‘Catch 22’, met Pogues roadie Stefan Cush whilst busking in Shepherds Bush in London.

On the exact day of release of “The Godforsaken Voyage”, The Men They Couldn’t Hang joined Stiff Little Fingers for 3 weeks on their UK tour. Tom Spencer now switching to guitar duties, allowing Paul Simmonds the freedom to switch between Mandolin and Bouzouki. This combined with several Festivals appearances in UK and German act as which a great prelude to TMTCH’s 30th anniversary in 2014 for which the band are busy writing new material right now.  Later in 2013 the band will launch a ‘Pledge’ campaign to enable fans to not only buy unique recordings in advance of the album but also to help shape the final end product.

2017 saw the launch of another Pledge Music campaign to record the follow up to The Defiant. The album, which is their 10th studio LP, Cock-a-Hoop was released in September 2018 to critical acclaim being described as some of their best work. The LP has received airplay across the UK with Steve Lamacq on BBC 6 music championing the track Sirens on his afternoon show.

The release was followed by a tour with shows selling out faster than ever and the band finishing the year with 2 storming shows at The Borderline in London. Following a well deserved rest…for some as Swill has now launched another Pledge Campaign for his next solo record, the band are looking forward to more gigs in 2019….. 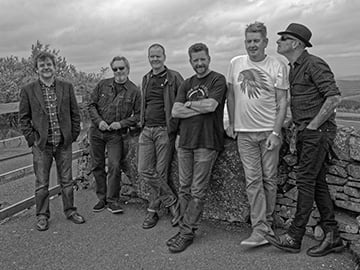