Frank is one of the most successful UK solo artists of the past decade and what’s special for Wickham is that he grew up right on our doorstep in Meonstoke, Hampshire! So we hope Wickham Festival will give him a real “coming home” welcome as our main festival headliner on Saturday 3rd August 2019! It promises to be as good as any folk-punk performance could possibly be.

He has stated his early influences included Counting Crows, The Levellers, and The Beatles before discovering his punk, hardcore and metal period. More recently he cites the Johnny Cash “American Recordings” series as influencing his direction towards many artists such as Neil Young, Bruce Springsteen, and in particular Billy Bragg. Over the last decade he has carved out an immensely successful career as a hard-touring, punk-folk troubadour giving him a large international following. His last 3 albums have all made the top ten in the UK.

His career began with the post-hardcore band Million Dead as their vocalist. He then moved into a primarily acoustic-based solo career. For Wickham Festival 2019 Frank will be accompanied by his backing band, The Sleeping Souls, which consists of:

Perhaps one of Frank Turner & The Sleeping Souls’ most bizarre performances was at the opening ceremony of the London 2012 Olympics. Other acts to perform at the ceremony included Paul McCartney and Arctic Monkeys. Frank’s quoted as saying “Directly in front of us was a field with sheep and horses and people pretending to play cricket. It was weird.” As a concept we can’t disagree but with Danny Boyle at the helm directing it proved a memorable vision and certainly a noteworthy achievement bestowed upon very few musicians.

Amongst Frank’s many other accolades and claims to fame is that he broke the most consecutive performances at Reading festival. Certainly a memorable moment was being introduced by his *disapproving* mother and entering the stage in a wheelchair with a *bad back* before performing Four Simple Words in 2013.  He first played there in 2005 with his band Million Dead and then from 2007 went on to perform every year to achieve a record number of sequential performances in 2016…

In 2015 Frank released a book entitled The Road Beneath My Feet, which is named after lyrics from his song The Road. Consisting of tour diaries and travel memoirs, it was a frank story of Frank’s career to date. It gave an accurate and intimate account of what it’s like to spend your life continuously touring and enduring the associated challenges. All for the love of playing live across the world. The book inevitably went on to become a chart bestseller. His brand new book, Try This At Home, is an updated memoir that takes songs from his back catalogue to explore his song writing method.

It gives the stories behind some of his most popular songs. Spending almost all his time thinking about songs and songwriting, he felt it time to get it down on paper to reflect on and share his thoughts.  It promises to be essential reading not just for his fans, but also for those interested in understanding what it’s like to be a touring songwriter and all that it entails. Or perhaps give inspiration to those wishing to tread this path.  This openhearted nature to share his story and talents are illustrated in videos on his YouTube channel.

Along with his band of accomplished musicians we are guaranteed a Saturday headline performance that is rousing, intimate and poetic. Judging by his hugely successful recent tour, the set promises to be Frank at his very best incorporating his most distinguished tracks.  For those of you lucky enough to have attended this tour you’ll know his support act was Grace Petrie who’ll also be performing earlier on Saturday 3rd August. What a night to remember it promises to be.  We can’t wait to welcome Frank Turner & The Sleeping Souls to the Wickham Festival stage! 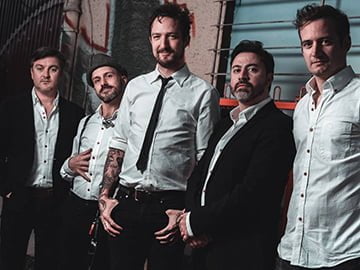