Winters Hill are back in town, or rather coming home to Wickham Festival!

We’re always keen to promote local bands and they don’t get any more local than Winters Hill. They went down a storm last year so much so we used their track on our 2016 promo video on the home page.  They’re a 3 piece Americana / Country band formed in 2012.  This year they’ll be performing on the main stage on Sunday 4th August.  Winters Hill consists of:

As lifelong friends who share a passion for music, the band formed on the back of watching Wickham Festival. Since then Winters Hill has grown way beyond what was expected. With Jack Holmàr on lead guitar, harmonica and steel slide, Max Hoar on rhythm guitar and lead vocals, and Nimrod Taabu on percussion, the band have crafted a distinguished alternative to the traditional Americana sound. Before ever playing in front of a single person, interest had begun from local radio as the band crafted their unique sound in Jacks’ loft. The trio played an acoustic session on Voice FM as their first ever live performance, and popularity has been rapidly growing ever since.

“We are pleased to say we will be playing the main stage at Wickham Festival this year. As many of you know, this is the festival that inspired us to start playing music. This truly means a hell of a lot to us. Thank you for everyone who has supported us over the last 3 years. When we stood by the acoustic stage 3 years ago, we never thought in a million years this would happen.”
Winters Hill 2016

“It was fantastic to watch this great band open on the main stage today.  This is a real fairy tale success story for Wickham Festival.  We’re sure these guys have an incredible future.  You heard them here first and hope they’ll be back to perhaps inspire some other local bands.  Thank you Winters Hill, it was a brilliant start to our day… “
Peter Chegwyn, Wickham Festival Organiser, 5th August 2016

Combining elements of Folk, Blues, Country and Rock, Winters Hill have a certain nostalgia and romance to their music. With catchy choruses wrapped in melodic guitar riffs, Winters Hill have been influenced by a vast range of musicians from both past and present; from Dylan to Young, Springsteen to Tom Waits, and Kenyan born Nimrods’ drumming style on the Cajon is something not to be missed. Within the first year of Winters Hill forming, they were playing at the London 02 arena for Country 2 Country, a spot well deserved from by the boys.

Winters Hills’ song writing style tells a story which is relatable to every listener; songs of good times and past times. Recent national radio (Amazing radio) sessions and joining bands on tour such as Brother and Bones, The Treetop Flyers, and Ben Caplan are creating a loyal fan base for the trio. Two-time Isle of Wight Festival favourites Winters Hill, are set to embark on this years festival season with new original songs and a brand new setup. Fresh from being invited by Gabrielle Aplin’s record label, Never Fade Records, and supporting Aplin herself to play the labels debut showcase night, Winters Hill are fast becoming the name all Americana fans are talking about. Listen to them chat with Stephanie Nieuwenhuys on BBC Introducing 22nd April 2017…

Their EP, Burnt Hearts and Landmarks, is available on iTunes. 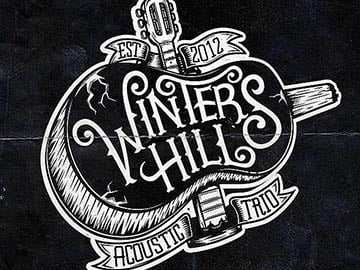