Winter Wilson are back on the road, following a hugely successful UK tour with folk-rock legends Fairport Convention, and now featuring songs from their latest CD Far Off on the Horizon. As with previous offerings, this new album has met with great critical acclaim:

“Dave Wilson’s songs pull no punches when relating to the sights and sounds of everyday local life, and are complimented by Kip’s powerful and emotional voice.”
Daily Telegraph, January 2018

“A sublime collection of tracks to kick off the new year in style. Well-balanced, strong songs delivered with care, and by people that are passionate about their craft. Lovely.”
Grem Devlin, Living Tradition Magazine

“Winter Wilson have landed another, right on the bridge of the nose; this is not an album that’s easy to ignore.”
Neil King, Fatea Magazine

But it is in live performance that these two really excel, interspersing great songs, stunning harmonies and fine musicianship with often hilarious tales of life on the road. That’s why so many venues and festivals book them time and again. 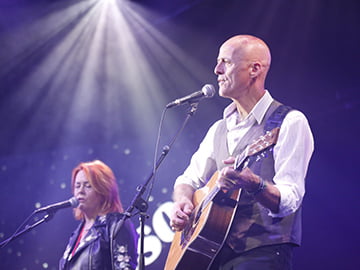