Acclaimed harmonica and melodeon player Will Pound is embarking on a musical journey across the states of the European Union, to discover and unveil the diversity and common ground of their traditional music and song.

From the lively Swedish polska to the upbeat Italian tarantella, the lilt of the Irish jig, to buoyant French bourées, relentless rachenistas from Bulgaria and the rip-roaring Spanish jota – these tunes have travelled, evolved and merged as Europeans have enjoyed freedom of movement and expression, a shining example of the strength and joy in unity.

Together with Polish poet, Bohdan Piasecki, and a live band featuring Jenn Butterworth (Songs of Separation, Kinnaris Quintet), multi-instrumentalist Jude Rees (Jim Moray, RSC, Pilgrims Way), bass player and beatboxer John Parker (Nizlopi) and fiddle player Patsy Reid (Breabach), join Will and be uplifted by the joyous sounds of the traditions of a continent and hear the stories and hopes of those affected by the politics of division.

An accompanying album featuring this new ensemble, alongside a host of guest musicians, will be released in May 2020.

Bohdan is able to make his audience laugh and cry within a few minutes Jenna Clake, UoBlogFest

…an authentically delivered set of pieces inspired by memories of childhood, family roots and social change in his motherland. Bohdan goes down a storm in his own right.  Rina Vergano, Bristol 24/7 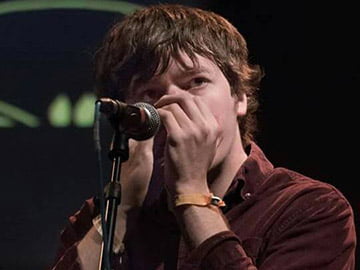 Will Pound was live.

Welcome back to my Sunday concert after last weekends break!

Hope you enjoy the tunes and craic and please donate if you can :)

Sounds a bit French different. My Brother plays the accord-an But I like your style is nice Dance dance where ever you may be. Is good. Very talented. Can you also play other. Moo God Bless ♥️😌💥🎼

Just putting on the morning coffee, here in New England, and you got me wanting to hitch up the horses.

Lovely Sun music thanks Will

Thanks for another fantastic Sunday Will, so uplifting I`ll be able to go out and get some of those gardening jobs done next

Ah, the "settee song" One of my pupils once asked for the settee song.. "you know miss, the lord of the dance settee"

Thank you for a lovely accompaniment to my sewing. e you next week.

What I really want to know is how you manage to play squeezebox without really severe "box-face". Both you and Tim manage it beautifully and... That's a skill haha!

Great tunes Will, thanks

I danced with devil till the sky turned black, it's hard to dance with the devil on your back.

They're all joining in now. That got everyone's approval

Can you try not to mention "squirrel" again , one of the dogs has just gone out like a rocket !

You were going to do one in the harp!!

Bonnie says "has he done any piano yet"

I would notice this! (non player)

Last saw you at Guildford 8 years ago 😎

In preparation for busking on the seafront...

Bandcamp are waiving fees for Artists today. So if you fancy buying some a Christmas present then feel free to roam on here...

A Day Will Come, by Will Pound
14 track album ... See MoreSee Less

A great review in EFDSS magazine for A Day Will Come :) 🇪🇺🎼🥳🥳

"A high-energy spin around what we used to be part of - and musically still are" ... See MoreSee Less