Will has been awarded Spiral Earth Magazine Musician Of The Year 2015, FATEA Instrumentalist of the Year 2013 & 2014, and been nominated three-times for BBC Radio 2 Folk Musician Of The Year. He has performed with musicians as diverse as Martin Simpson, Concerto Caledonia, Michelle Burke and Guy Chambers. His own projects include Haddo, Walsh and Pound and The Will Pound Band.

Eddy Jay performed in the stage musical version of Noel Coward’s Brief Encounter’ (Kneehigh theatre) which toured US theatres including Studio 56 on Broadway (NY). He has performed with Cathal Coughlan and Tina May, and also devised his own shows of Prokofiev’s ‘Peter and the Wolf’ and a musical biography of Edith Piaf. 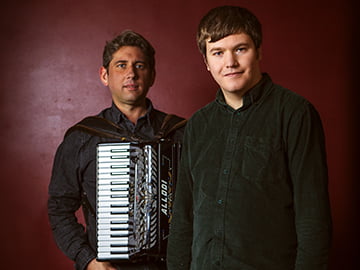