This will be the ultimate “Feelgood story” as Wilko Johnson makes an emotional return to Wickham. Two years ago the former Dr Feelgood guitarist played what was expected to be his last gig here after being diagnosed with terminal cancer.

Wilko refused treatment and hit the road for the ultimate “Farewell Tour” recording Going Back Home with Roger Daltrey which reached number 3 in the UK album charts. He was already defying the doctors when he brought the house down at Wickham in 2013 but since then he has made an almost miraculous recovery and is still going strong.

With his trademark machine gun style of guitar and a string of hits to his name, Wilko Johnson is regarded as one of the most influential guitarists in the industry. There won’t be a dry eye in the house when he returns to Wickham.

We can’t wait for him to kick start our weekend. You can read an interview with Wilko in our news section and see his 2013 appearance on our videos page. 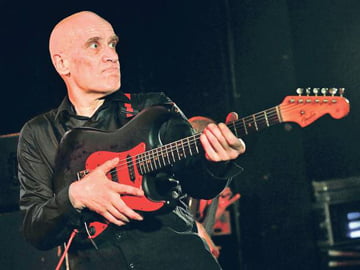