Treacherous Orchestra story is one of many strands, a tale told spanning the length and breadth of Scotland. An un-definable collective force fusing people, concepts, styles and influences, shaping a musical supergroup that defies description. From the North to the South, East to the West they came, converging in the musical melting-pot of Glasgow, trading ideas over beers and playing music with ferocity, verve and passion. This is a tale of musical origins…

These roots and strands – the essence of the band – are the stories of the members themselves, all emerging from their own musical habitat and adding their own distinctive identity. The band is composed of seasoned musicians who are already treading notable paths and reaching international recognition with other bands as performers, arrangers and composers. Those bands that have gone before them, the likes of Martyn Bennett’s Cuilinn Music, Wolfstone, Peatbog Faeries, Shooglenifty and Salsa Celtica tell the tale of a country full of bright musical minds, ideas, innovation and evolution. It is a tale that continues with the rise of this epic Orchestra. 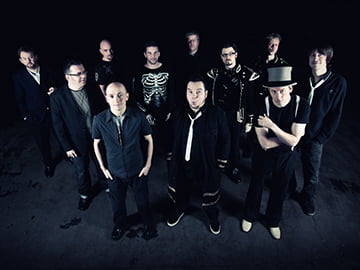