three)(fold are a brand new band made up of seasoned players who have been around the Folk-Rock scene for over 25 years.

The band’s line-up is:

The band consist of one half of the long established (23 years and counting) Folk-Rock band, The Fold. The idea to try something different came up at an acoustic rehearsal in Spring 2017 and three)(fold is the result. Since then it has been rehearse, rehearse….and rehearse!

Going out under the banner ‘Acoustic folk-rock & beyond’, the material is a mixture of new songs from songwriters Jon and Hanna, selected covers and new arrangements of Fold tracks.

The band will only have played a handful of gigs prior to this festival performance so come and catch them at the very start of their journey.
The band haven’t had time to do a demo yet, but here they are in the studio some years back as members of The Fold (this clip also features Linda Game of The Fold on fiddle). 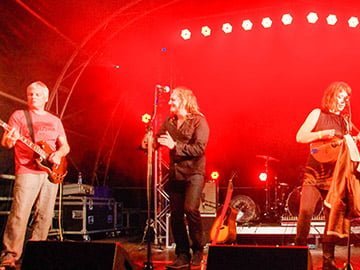