Few bands have as great a live reputation as The Waterboys. From their mid 1980s “big music” period through the influential mix of Celtic, gospel and country on their classic Fisherman’s Blues tours, to the hundreds of brilliant shows accompanying the last decade’s rootsy, soulful triptych of albums Modern Blues, Out Of All This Blue and Where The Action Is The Waterboys have consistently blended tightness, inspiration and improvisation to reach heights of performance few other acts can. The 2020 version of the band features the established core of Mike Scott (vocals, guitar, piano), Steve Wickham (electric fiddle), Memphis keyboard great “Brother” Paul Brown, ace British drummer Ralph Salmins and funky Irish bassman Aongus Ralston.

Meanwhile the relevance and popular reach of The Waterboys has never been greater. Their songs have are performed by artists as varied as Ellie Goulding, who scored a top 3 UK hit with “How Long Will I Love You”; Prince and U2 who sang “The Whole Of The Moon” onstage and Fiona Apple, who recorded it last year; indie rockers The War On Drugs, Dawes and The Mystery Jets; and classic singers Tom Jones and Rod Stewart. “The Whole Of The Moon” featured in last year’s smash Netflix film Let It Snow and top HBO series The Affair. Waterboys music shows no sign of fading, and the very best place to experience it is in a concert hall. Come and feel the fire. 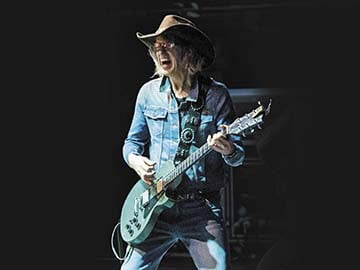 These cats dig My Wanderings In The Weary Land & have added it to their playlist. The rest of their playlist is pretty good too. If you want to groove on some rock today try this:
t.co/9ksCr8vkjb
#TheWaterboys #GoodLuckSeeker #CookingVinyl #RockIdagSpotifyPlaylist ... See MoreSee Less

We are 3 weeks into our new Patreon page and so far subscribers have gotten access to 28 musical tracks (with accompanying text from Mike), 3 exclusive videos, and a variety of visual archive material. If you join for £10 a month + VAT, you’ll immediately gain access to all of this. More items will be posted regularly. Click the link below for more info and thank you to those who’ve already subscribed!

The Waterboys is creating mAGic | Patreon

I`ve been a fan since Another Pretty Face but was wondering if this was worthwhile. Not just paying out £10 but if the stuff made available was worth listening/seeing. As much as I love The Waterboys I also listen to many other bands/artists so time to take in the extra stuff is a question for me.

Seems a bit steep..like buying an album every month.

Music you can live in !!

I signed up for the Patreon on the first day, and absolutely love it! Yes, we all have to pick and choose what we want to/can afford to spend our money on, especially at the moment, but for me, this Patreon site is proving to be a delight and has already provided outstanding value for the price.

Best £12 per month I ever spent, some great pieces of music, wonderful stories and pictures, what's not to love.... I really do not understand what some of you want.

Been a huge fan from way back, been to Findhorn travelled to Westport to see Mike and Steve, down to Dublin many times and here in Belfast when he played the old Arts theatre and Empire, but at such times of hardship for so many I'm sorry to say£10 plus vat to access my fav music is out of my budget.

Natural Beauty & talent comes with A heavy price! I can think of worse Things to waste your money on than the MUSIC of Mike Scott! THINK 💙🏴󠁧󠁢󠁳󠁣󠁴󠁿

For the second Monday in our ‘Video Mondays’ series, today The Waterboys release their video for THE GOLDEN WORK from the new album GOOD LUCK, SEEKER. The film is a stately-yet-funky montage of buildings and sky scenes shot by Mike during a car ride in Tokyo last year and edited and mashed by Anana Kaye of Duenda Visions. You can view it at
twb.lnk.to/tgw

We’ll be back with another new video next Monday. Meanwhile if you don’t have it yet, order your copy of GOOD LUCK, SEEKER at
twb.lnk.to/GLS

Also Mike has been posting unreleased tracks and background stories that deepen the experience of the new album every day for the last week on Patreon. You can join us on Patreon for £10 plus VAT each month at t.co/1PMzup9WG6 ... See MoreSee Less

Wish it was a normal vocal. Then it might have been quite good.

Love it! Would never know it,s The Waterboys. Real grower.

Mmmm not the waterboys at all after two listnings don’t like it .

Not bad - sounds more Daft Punk than The Waterboys though.