To reduce cultural barriers, The Trouble Notes have made it their mission to create their own cultural universe. Their self-described “Acoustic Dance Music” is a unique blend of the genre that sits at the crossroads of the raw energy and organic instrumentation of Folk music and the modern sounds of contemporary rock, roots music, and new-age electronica.

It’s a sound informed by The Trouble Notes travels. The band spreads its message by building bridges across musical cultures in their own unique way.

The Berlin-based trio is composed of violinist Bennet Cerven, guitarist Florian Eisenschmidt, and percussionist Oliver Maguire. Hailing from different countries, each member of the group brings a different musical training and perspective to the band.

Since their formation in 2013, the trio has performed at some of Europe’s largest festivals and videos of their performances have been viewed more than 100 million times on social media. They have scored multiple award-winning films including Als Paul über das Meer kam and Carracci: La Rivoluzione Silenziosa and have toured in support of the Grammy-winning artists America & Rodrigo y Gabriela.

Everyone that joins the universe of The Trouble Notes remains a part of it and often morphs from a normal concertgoer into a true Troublemaker-sharing in the journey of the group. 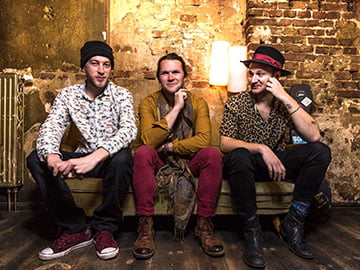