We’re delighted to announce that legendary producer, performer & songwriter Trevor Horn will be bringing his all-star band including Lol Creme (ex-10cc) and guest vocalists to perform at the Wickham Festival on Saturday 6th August.

If the success of a record producer can be judged by the weight of awards on their shelves then Trevor Horn ranks as the world’s number one. He has a hat trick of Brit Awards for Best British Producer from 1983, 1985 and 1992. In the 80s he was Rolling Stone’s Producer of the Year 1983. In the 90s, he was Best Producer at the 1991 Q Awards. And in the 00s, Music Week’s 2004 Producer of the Year.

But for Trevor Horn these accolades mean little – success comes from creating records that feel as important as the ones he bought as a child, and music that can hold out that same “promise”. This he has achieved by producing legendary singles like Band Aid’s ‘Do The Know It’s Christmas?’ and Godley & Creme’s ‘Cry’; the mainstream pop of Robbie Williams and Olly Murs; cult classics like Malcolm McLaren and the World’s Famous Supreme Team and Kid Harpoon; and the whole spectrum of groups, with Genesis on one side and Spector on the other.

Then there’s his work with vocal artists both male – ranging from Paul McCartney to Shane MacGowan and from Gary Barlow to Bryan Ferry. And female – Estelle to Cher, Leann Rimes to Kelly Rowland. To say nothing of a continued passion for nurturing brand new talent which, in the last few years, has included Dog Is Dead, Blackfield and Azekel. “There’s one only common theme that links all of Trevor’s work,” says the founder of Island Records, Chris Blackwell, “and that is excellence.”

What does a record producer actually create? Paul Morley, Horn’s co-founder on projects such as Art of Noise and ZTT Records explains it best. “If in the 60s, Phil Spector created a ‘wall of sound’,” he says, “by the middle of the 80s Horn had already established his sound, a whole room of sound, the walls, floors, ceilings, doors, windows, decorated with absolute flourish. As an architect of sound, Horn is unashamedly an exhibitionist, an utter show off… He has proved time and time again that pop is an art form, and that he is the supreme pop artist.”

The Trevor Horn Band will be performing many of the classic hits he’s produced for world-renowned artists in a career spanning five decades. 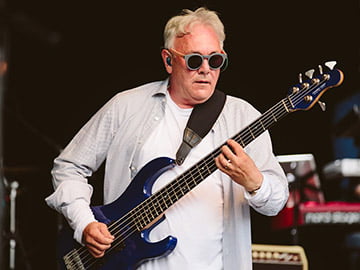 The Trevor Horn Band appeared in 2016