Formerly the Beautiful South, this new incarnation of the band is as popular as ever going down a storm at Wickham Festival in 2015 and 2018.

With 15 million sales and a string of top 20 hits in their repertoire, you are guaranteed to be singing along to such tunes as Rotterdam, Don’t Marry Her, Perfect 10, Song For Whoever, Old Redeyes and the band’s UK Number 1 A Little Time.

When great British pop institution, The Beautiful South split in 2007, some members of the band didn’t feel ready to hang up their microphones or instruments just yet…

And so The South embarked on their journey. Celebrating the Beautiful South legacy and great songs of their own, the band continues performing the classic songs including: A Little Time – the number one single, Perfect 10, Rotterdam, Old Red Eyes, Good as Gold, Don’t Marry Her. All performed again live, these songs span an impressive 20 year career starting way back in 1989!

Fast forward to 2017 and its all change. Dave Hemingway has announced his retirement from the live music scene, Damon Butcher now resides in Ireland thereby leaving the band and Tony Robinson has moved on to pastures new.

It was time for The South to regroup and have a rethink. With the support from their amazing fans, they were encouraged to strive onwards. Right under their nose was an obvious choice. Up stepped long time sax player Gaz Birtles to take centre stage and take over the male vocal duties. As well as performing with The Beautiful South and within The South, Gaz has also had success in his own right as a singer songwriter. Quite handy he should also know the back catalogue of Beautiful South songs too!

We are also excited to welcome to the band the new sax player Su Robinson. Su has had a wealth of live experience with such legends as Prince Buster, The Specials’ Horace Panters band, Uptown Ska Collective as well as sitting in with The South on the few occasions Gaz Birtles couldn’t make it.

Long time trumpet replacement for Tony Robinson, Gareth John, is now established as a permanent fixture. His past glories include working alongside members of the Happy Mondays, Fun Lovin’ Criminals, The Specials, Vintage Trouble and many more.

With the new reshuffle complete, The South are a full team again and raring to go! Their live show promises to continue to celebrate and perform the classic Beautiful South songs along with songs from The South’s debut album ‘Sweet Refrains’ and maybe even new material in the future too.

Come on! Let’s Carry On… Regardless! 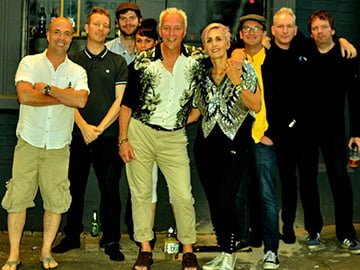