The Proclaimers are confirmed to return to Wickham Festival, headlining on Thursday 1st August.  The Scottish duo are making a triumphant return where they last played a stunning set in 2015. Craig and Charlie Reid wowed the crowd with a brilliant upbeat set and now they are back with a mix of old favourites and new tunes to promote their latest album.

The album ‘Angry Cyclist’ was released to immense acclaim on August 10th 2018 (Cooking Vinyl) debuting in the UK Official Album charts at 17 and at number 3 in the UK Official Independent Album Charts. The Proclaimers 8th Top 40 UK album.

The Proclaimers then headed back out live from July through to December this year with 48 sell out dates across the UK and a 13-date tour of Canada from Victoria to Montreal.

2019 will see concerts so far confirmed for Iceland, Dubai, Singapore, Norway and further festivals and shows in the UK.

Strikingly individual, twin brothers Craig and Charlie Reid emerged 31 years ago with their debut album This Is The Story and Top 3 single ‘Letter from America’. Since then their enduring appeal across generations has have over the years seen them enjoy huge success across the globe

The Proclaimers songs are timeless, capturing a gamut of human emotions, written with poignancy, emotional honesty, political fire and wit. Their songs feature at weddings, funerals and everything in-between and there is one song, an early celebration of falling head over heels in love that is known the world over and has become a staggering global anthem. There are many others that have gained great popularity in different parts of the planet and then there is a wide cross section of sublime songs embraced by a multitude that has kept up with The Proclaimers studio albums, compilation collections and extensive touring over three decades. 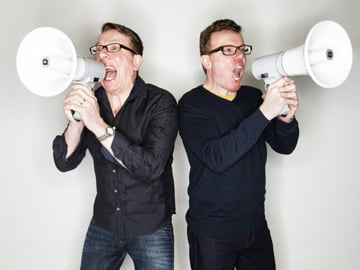