The Outcast Band are an intense and original indie folk-rock band hailing from Stroud.  The influences from folk, punk and rock are apparent but they have created a distintive sound which has earned them a reputation for giving what many have described as the best live music experience of their lives.

The Outcast Band are:

One of the festival circuit’s most interesting offerings, the band have enjoyed some notable achievements including:

With echoes of The Waterboys, New Model Army and The Levellers, the band produce a huge sound firmly based in rock and complemented by violin, mandolin and accordion. With songs such as Hurricane Day (“epic”- Classic Rock Society)
and The Garden Song (“a wall of sound” – Get Ready To Rock) the band hold nothing back, giving the audience a performance packed full of raw emotion.

The lyrical narrative of the songs, both stark and compelling, tells stories of struggles with the extremes of emotion and, although characterised by a distinct lack of optimism, there are “glimpses of stars from the gutter” – R2 Magazine. 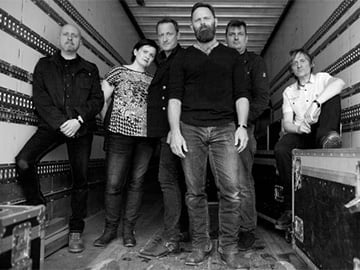 The Outcast Band appeared in 2018