The Hut People are constantly gaining more of a reputation as one of the most entertaining acts to appear on the folk scene in a long while. In their surprisingly engaging and often hilarious show, they perform a truly unique high-octane blend of folk music from around the world – perfectly formed & embellished with a foot stomping accordion and mind-boggling array of exotic percussion (with some Quebecois foot percussion & dancing thrown in for good measure too!). A hugely entertaining duo getting unbelievable feedback from audiences, festival organizers and music press alike. 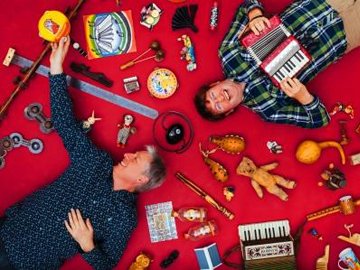 The Hut People appeared in 2015