One of Scotland’s most popular folk-based groups to emerge in the last decade, chart-toppers Talisk have toured the world stacking up major awards for their explosively energetic yet artfully woven sound, including Folk Band of the Year at the BBC Alba Scots Trad Music Awards, a BBC Radio 2 Folk Award, and the Belhaven Bursary for Innovation.

Mohsen Amini (BBC Radio 2 Folk Awards’ Musician of the Year 2018), Hayley Keenan and Graeme Armstrong fuse concertina, fiddle and guitar to produce a ground-breaking, multi-layered and instantly enthrallingsignature sound that has captivated audiences around the globe.

Their hotly anticipated second album, Beyond, quickly rose to No.1 in the iTunes world music charts upon its late 2018 release, meeting a five-star ‘Top of the World’ review in leading world music magazine Songlines, who brilliantlysummarised the band: “incredibly infectious and endearing… fresh, invigorating, accomplished. 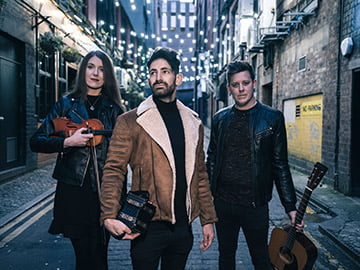