We’ve a real treat in store as we welcome Squeeze to headline Wickham Festival on Saturday 4th August 2018. Squeeze formed in Deptford, London in 1974 after Chris Difford and Glenn Tilbrook began writing together.  At the time the band also comprised of Jools Holland on keys, Harry Kakouli on bass and Paul Gunn on drums.  By 1977 they made their recording debut and had a number of hits which lasted until 1982 during the New Wave period. Here’s a trip down a late 1970’s memory lane…

In 2008 Glenn and Chris received the Ivor Novello Award for Outstanding Contribution to British Music, presented to them by Mark Ronson. This was 10 years after Chris had already won the Ivor Novello for British Songwriter. With accolades in trophy cabinets it was time for a Squeeze reboot and they’ve since been a regular festival favourite playing at Womad, Beautiful Days, and V Festival to name a few.  The band has long been an enthralling live act, as they demonstrated in their triumphant performance on the Pyramid Stage at Glastonbury in 2016.

“They don’t have the bombastic hype of headliners Coldplay, but they have the songcraft and lyrical majesty to leave the headliners in the dust which they duly did.”
Acoustic magazine

Their artistic recognition has also sparked continued success with new material in the recording studio.  In 2015 they released the critically acclaimed ‘Cradle to the Grave’, which was written as a soundtrack to Danny Baker’s BBC TV sitcom of the same name starring Peter Kay.

This album marked a hugely successful return for the song writing partnership.  Whilst promoting Cradle to the Grave they caused a media storm after performing on The Andrew Marr Show with David Cameron obliviously looking on (nice camera pan out Mr. BBC Producer) and enthusiastically clapping. Off the cuff, Glenn decided to change the last verse to…

“I grew up in council houses,
Part of what made Britain great.
There are some here who are hell-bent,
On the destruction of the Welfare State.”

It didn’t take long for social media to kick in with the clip going viral.

The new line up for their current 2017 tour features the addition of percussionist Steve Smith and Yolanda Charles on bass. Steve is also the lead singer of Dirty Vegas.  Yolanda is a bass maestro who has toured with Paul Weller, Eric Clapton and Hans Zimmer. In addition the long-standing lord of the keyboards, Stephen Large joins them along with drummer Simon Hanson.

Squeeze are currently touring the USA, Australia, and Singapore; but Wickham Festival awaits them next summer!  Happy days in the haze of the Wickham summer are pending, we can’t wait to welcome these Ivor Novello song writing legends… 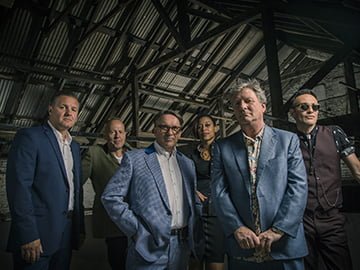 A little snippet of our first sound check in SIX MONTHS and WE ARE ON STAGE IN LESS THAN AN HOUR!!!

What an amazing thing to be able to say again 😎🤘
We have missed doing what we love.

SEE YOU SOON, PUB IN THE PARK DRIVE-IN GARDEN PARTY

Having a great time in the car park! The music sounds great and there’s loads of dancing space! Really looking forward to having you back 😃

Squeeze you were fabulous! It was so great to be dancing at a live gig again after so many months. You were the last live band we saw before lockdown, in Reading, and the first afterward. What a great set.👏🏼👏🏼👏🏼👏🏼👏🏼👏🏼🎶❤

Glad to hear you're touring again! We saw you in Hershey before the world went to hell 😬😛😷! Only time we've seen you not as the main act but show was great as always!

You were amazing tonight, I wept with pure joy being able to enjoy the pleasure of live music again, thank you ❤️

Was really looking forward to your show at the Hollywood Bowl this year... We’ll catch up soon enough!

Heard you from the car waiting to get in. Just fantastic!

I was at your last concert in Tarrytown NY before the Covid shutdown.

Squeeze concert in late February was the last show I saw before Covid. It was a fantastic one too !!

So jealous of all the people who get to be there!!! Enjoy!

Have a great time all you lucky peeps(｡♡‿♡｡)

How good does this look...😊

Saw you in Providence back in February - fantastic show!!!!!

Waiting in the field for y'all to start!

You were amazing! Sang along to every word❤️

Hope to see you all back in the states real soon❤️❤️❤️

When do we get rescheduled dates for the States?

It takes many people and businesses to bring a show to life.

So grateful to have seen you on 2/29 in Maryland, just a few short weeks before the world changed forever.

Can’t wait for August of 2021! I’ll be seeing you all at Mansfield Ma.

Haven't seen you guys live since "The Ritz" in NY back in the 90's but so glad you're not coming to the U.S. until people wake up, especially here in Florida. You're still on my bucket list, I just have to make sure not to kick it before you come! Stay healthy and keep the vocal cords all warmed up for me!

So…This weeks cover is a song with music by Brian Wilson and Lyrics by Van Dyke Parks. I was an obsessive record collector from age 10 onwards and one day on a bus coming home from my Grandparents in Bromley, I suppose I was 11, I got off just before Catford bus garage when I noticed a new discount record shop. That’s where I bought ‘Smiley Smile’ by the Beach Boys for 14/6d. That’s less than half price! It hadn’t even been out a year, and Capitol records had clearly given up on it. I must admit it took a while to grow on me and this song was the penultimate song on the record, which is a coincidence as this is the penultimate song in this series. It’s been fun for me and I hope for you. With thanks to Oriana Robos-Murray for agreeing to be in the video, Suzanne Hunt for shooting it, Carly Dexter Fry for doing a wonderful edit, Leon Tilbrook for playing Guitar and the rest is all me, me, me. Until next week!

Food bank links below again if you can ….

excellent reading and I'm must say bold in light of the difficult and unorthodox vocal melody lines of the track. You range would fit wonderfully with BB harmonies. Another roaring success!!!

What a treat this series of songs has been, Glenn! Thanks for the music.

Superb. I can see how Brian Wilson was a big influence on Glenn's songwriting here

Glenn you should’ve been a beach boy with that voice! What can I say? Wonderful 🎵🎵🎵👏👏👏

One of my favorite records! Thank you Tilbrook family!!

That was as beautiful visually as it was audibly. 😍

Another great one! ❤️

Will there be one more cover video after this?