Sam Kelly is a BBC Radio 2 Folk Award winning Bristol-based singer, song-writer, producer, and multi-instrumentalist. As a young child Sam spent many a night enraptured, listening to his Irish grandfather tell folk tales, sing folk songs, and play folk tunes on his melodeon. Having caught the bug, Sam has dedicated his life to rediscovering and renewing the sounds of his gaelic heritage, and creating exciting new music that transcends the boundaries of traditional and popular music.

In 2017 Sam signed a publishing deal with Wipe Out Music, an agency deal with Strada Music and a record deal with legendary folk label Navigator Records, and in a very exciting year saw his music appear on a wide variety of mediums from Channel 4 Soap Hollyoaks to Sky Sports darts coverage, Sky Arts to Cafe Nero. After a full summer of headline festival slots with his band, he released his second album, and The Lost Boys first album – Pretty Peggy in November 2017. This album proved a huge leap forward for Sam and the band, as they were nominated for Best Group at the 2018 Radio 2 Folk Awards, and Sam was invited to perform songs by Jez Lowe and Ray Hearne alongside an all-star cast of folk musicians including Kris Drever and John McCusker for a special commission called Ballads of the Great War, which was broadcast on Radio 2 on Remembrance Day 2018.

Coming from a family largely made up of Norfolk dairy farmers has left Sam with an unmatched experience of singing in front of hurtfully disinterested Friesians, and his meandering musical journey has ranged from reaching the final of ITV’s Britain’s Got Talent as a teenager, to becoming one of the most prevalent folk singers of his generation. Whether playing to 13 million people on prime-time television, or to 10 people in a tiny pub, Sam’s child-like fascination with music shines through, and his passion for discovering and rekindling the sounds of his musical heritage has gained him the respect of peers and audiences worldwide. 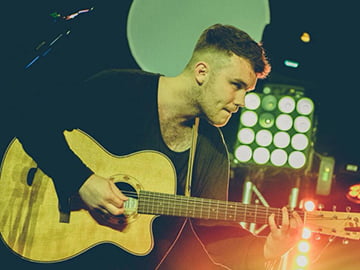