Ryan Young is an emerging young fiddle player from Scotland – one of a ‘new wave’ of young players bringing fresh and inventive ideas to traditional Scottish music. Ryan’s fiddle playing is brimming with fresh melodic ideas, an uplifting rhythmic drive and a great depth of dynamics and precision. Ryan Young Traditional Scottish Fiddle Player ScotlandRyan Young’s violin sound is very distinctive and he always manages to take the listener on an adventurous and emotional journey in any performance. Ryan studied and graduated with a first class honours degree in Scottish Music from The Royal Conservatoire of Scotland and has now also completed his Master’s in Music. Ryan is a two time BBC Radio 2 Young Folk Award nominee, a Celtic Connections Danny Kyle Award winner and was as a finalist in BBC Radio Scotland Young Traditional Musician 2015 and 2016. Ryan played at the famous Willie Clancy Week, in Miltown Malbay, Co. Clare, Ireland in July 2016.

Jenn Butterworth is one of the foremost folk guitarists in the UK acoustic music scene. An excellent collaborator, she has been a key member of a range of high profile folk music projects, including Ross Ainslie and Ali Hutton’s SYMBIOSIS Big Band, three Celtic Connections New Voices, four years on the BBC Hogmanay Live show as a member of the All Star House Band and recently a member of folk supergroup ‘Songs of Separation’ involving an array of prominent folk artists including Eliza Carthy, Lady Maisery and Karine Polwart. The Songs of Separation album, conceived, arranged and recorded in just 7 days, won the title of ‘Best Album’ at the Radio 2 Folk Awards in 2017. 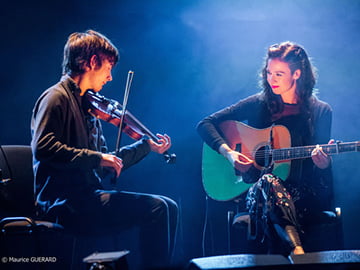 This message is only visible to site admins
Problem displaying Facebook posts. Backup cache in use.

Error: (#803) Some of the aliases you requested do not exist: ryanyoungmusic
Type: OAuthException

Lots of lovely people have been asking me about my hand recently, so I felt like this was the easiest way to keep you updated. I had some treatment done today! So hopefully things will improve after a short rest and my playing will start getting better 😊🎻

You have to admire the honesty of a specialist who says: ‘this will be sore’ 💉 😂 ... See MoreSee Less

Wishing you a rapid recovery! Good to have it done so quickly!

Get well Ryan.. I will keep my fingers crossed.. you keep the open for healing. 😉💪💪👊👍

thanks for the info dear Ryan ... I wish you a speedy recovery ... and hope to hear you play in Germany again next year, take care 🤗

Sorry to hear you needed an op Ryan, hope it heals well. James and the rest of the family wishing you well!

Hope you make a quick and full recovery. All the best.

Wishing you a speedy recovery from Belgium!

Hope you back fiddling reel soon!

I hope you recover quickly and completely. I did receive your CD. Thanks!

Thank you so much for the up to date ! This soon will be behind you !

What a shame. I wish you a prompt recovery.

Brave soldier! Hope that does the trick.

Well, if there ever is a time to get it all healed, now's the one.

Hope you ok and don’t listen to your big bro! 🤐

😃😃😃🌙📣 SHARING ALL 168 Performers - this is the FULL LIST of acts to perform at the 59th Annual Philadelphia Folk Festival Aug 13-16, 2020!
With your ticket or pass, purchase at folkfest.org, you get:
➡️ 168 performers
➡️ 4 nights
➡️ 3 Stages
➡️ Over 100 hours of music
ALL of this plus Archival footage, interactive chats, zoom campsites and #PFF59, and all from the comfort of your home or bubble. No shoes or hard pants required.
What are you waiting for? Get your merch, campsite and tickets today and #festinplace with us. ... See MoreSee Less

I’m so delighted to be part of Postcards from Scotland 🏴󠁧󠁢󠁳󠁣󠁴󠁿

Tune in to Cambridge Folk Festival at Home this Sunday (2 August) at 2.30pm to see them 😊