Robb Johnson is now widely recognised as one of the finest songwriters working in the UK today. His songs feature in the repertoires of a wide variety of musicians, from folk legend Roy Bailey to acclaimed cabaret diva Barb Jungr, & he enjoys a similarly diverse spectrum of critical acclaim – “a modern-day Dostoyevsky” said the US’s Dirty Linen, Mojo made the double CD Gentle Men Folk Album Of The Month, while The Daily Telegraph made it their Folk Album Of 1998, & Tony Benn says Johnson’s “Winter Turns To Spring” is his favourite song.

He has played pubs, clubs, pavements, pickets & benefits, arts centres & festivals, local radio, BBC Radio 3 & 4, Belgian Radio 1, Nicaraguan TV & Channel 4, the Albert Hole in Bristol &, as part of Roy Bailey’s 1998 concert, the Albert Hall in London. In February 2006 Robb appeared at the Barbican as part of the prestigious BBC “Folk Britannia” series, where “for the encore, Robb Johnson leads all the artists (and the audience) in the World War I song (‘Hanging On The Old Barbed Wire’)” (BBC Folk Britannia website) in a concert that was screened later that month on BBC4. Earlier this year Robb was the featured guest on Andy Kershaw’s Radio 3 programme. Robb also plays extensively in Belgium, Holland & Germany, & he has toured Britain supporting Chumbawamba, & the US with David Rovics.

Robb has worked with a variety of bands, with friend & fellow songwriter Leon Rosselson, as well as solo. In 1997 Robb wrote the song suite Gentle Men, an ambitious family history of the first world war for the Passendael Peace Concert, where the musicians were a jazz combo led by Belgian jazz legend Koen De Cauter, & he subsequently toured it successfully in Britain too. Robb’s album Metro (released in September 2005) featured piano accompaniment by the late Russell Churney, who had previously worked with Julian Clary, Barb Jungr & Fascinating Aida). Again, the album received widespread praise in both music & national press: “unquestionably classy… excellent songs (that) show again what a fine, if provocative writer Johnson is” (The Daily Telegraph).

His label Irregular Records has also facilitated releases by a variety of song-orientated artists, including an album celebrating the work of Jacques Brel that has done much to focus a renewed interest in the chanson genre. He has translated several of Brel’s songs & performed concerts celebrating Brel’s life & work. Robb has also co-written Woman, a biography of Yoko Ono, published by Chrome Dreams. 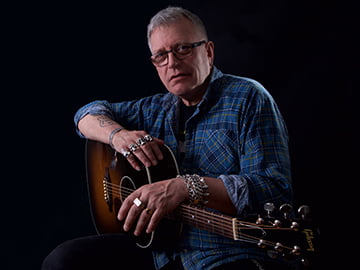 Who has bought the album so far? If so you will know that this is beautifully sang by John & Fae, two of the Irregulars!

Paul Sandy is this one you requested?? It's called Rolling On...!

If you haven't bought the album yet then try and get it from your local record shop - we saw it in Resident Records in Brighton at the weekend - www.resident-music.com/productdetails&product_id=71082?fbclid=IwAR38zHsauAIeBa0okrydtVX23IrtXzzZx... Please try not to buy it from Amazon... unless you can't get it anywhere else!!

The last song from the Pandemic Songs is Palmeira Square - somewhere I got the pleasure of visiting yesterday! Stay with us though as there will be a few songs after this one...

If you are enjoying the gig please consider making a donation to the “virtual hat” - all donations gratefully received however little you can afford www.paypal.me/robbjjohnson

The next song is The Days We Don't Forget - will normality ever come back? We hope so!! It's a song of hope, that's for sure!

How amazing is the Pandemic Songs album? Stay tuned - a few more songs coming up - next up is Rendezvous Des Artistes.

Next song - Victory in Europe - 60,000 smiling faces disappear whilst the Brits were all out celebrating VE day with their bunting and flags!!

Next song Orange Class News - part of the warm-up act before "Pandemic Songs" If you would like to put some money into the “virtual hat” you can do so here - www.paypal.me/robbjjohnson

We hope you've had a great evening - www.paypal.me/robbjjohnson if you want to donate to the virtual hat

Next up is 5373 (this one of my personal favourites on the album - but they are all so great it's so hard to choose!).

The next song is called 89p - this is about Boris saying that to thank the NHS staff he would give them a badge - well not quite give it to them - they could buy it for 89p!!! Grrrrrr.....!

Robb is now on Twitter (run by media team at Irregular Records on his behalf) – follow him here twitter.com/RobbJJohnson

The next song is Big Floyd - remembering George Floyd who was killed by the Minnesota Police :(

The next song is If the night runs out before the money runs out...

We are now moving into the main event - "The Pandemic Songs" - first up, Saint Mary

The next song is called Disinfectant - about Trump's exclaimation that Corona Virus could be resolved with drinking disinfectant!! A bit of light but scary humour...

Robb is now on Instagram (run by media team at Irregular Records on his behalf) – where you will find the “Pandemic Series” of videos of songs written during the lockdown www.instagram.com/robbjohnsonofficial/

Anybody at a loose end later tonight, Hove Palladium will be celebrating the release of Pandemic Songs here at 8pm. Support act: me doing some songs not on The New Album. See you later? ... See MoreSee Less

The new album is incredible played it twice yesterday.

Aww, we missed this session. Didn't know Robb was playing this Sunday, due to us whooping it up in sunny Orkney! CD on order though, and will catch up on the Palladium session ASAP! Love to all Ian and Sarah

Mmm.. Let me think. Anything better? I'll be there!

Definitely - see you there!

I will be there!