Police Dog Hogan are a hard-to-pin-down mix of Americana influences and British songwriting tradition. They combine fiddle, trumpet, banjo, mandolin, accordion, drums and guitars with four-part harmonies – then fuse it all into songs whose subjects range from shitty white wine to the first day’s battle at Passchendaele; from their trip to Nashville to being hung for stealing at Tyburn, taking in songs about love, loss and growing up in the West Country along the way.

Many Guardian readers will know that Tim Dowling is the banjo player in Police Dog Hogan: what they may not know is that he’s recently added the ‘Flat Guitar’ to his repertoire.

The Sunday Times described them as ‘wonderful’, The Telegraph called their gigs ‘legendary’, Mark Radcliffe on Radio 2 said ‘a great night out is guaranteed’ and much-loved DJ Johnnie Walker has named PDH as ‘one of my favourite bands’.

Police Dog Hogan were one of only three UK bands invited to Nashville to perform at the prestigious Americana Music Association awards where DJ Bob Harris – in town at the time – snapped them up for a live recording that has become one of the most-watched YouTube videos on his ‘Under the Apple Tree Sessions’ channel.

Their second album was produced by Eliot James (Kaiser Chiefs, Bloc Party, Noah and the Whale credits), and the last two albums by Al Scott (Seth Wakeman, Oysterband, The Levellers and more). The latest, ‘Wild By the Side of The Road’ spent several weeks in the official UK Americana charts and a single “Devon Brigade’ has recently been released, together with a touching video.

The band have played over 300 gigs together including Port Eliot, Kendall Calling, Larmer Tree, Bestival – and last year on the Avalon stage at Glastonbury. In July 2017 they were among the headliners on the main stage at the Cornbury Festival.

They have a big banner and a small banner, depending on where they’re playing. 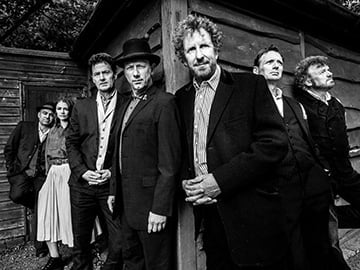