Panatical steel band is made up of past and present pupils of Crestwood Community School.  They were formed in 2007 when the school was asked to provide a band at an international music festival in Gołuchów, Poland. In the years since then, the band has welcomed over 80 students of Crestwood Community School and has gone from strength to strength, performing at over 30 gigs per year.

Recent highlights include performing at Music For Youth’s school proms at the Royal Albert hall in November 2016 and CarFest South in August 2017 and 2018. The band are looking forward to performing at CarFest again this year as well as RunFestRun, Wickham Festival and the Taunton Flower Show.  The band has over 3 hours worth of memorised repertoire ranging from soca, calypso, reggae and ska, to pop and rnb to even some classical pieces! 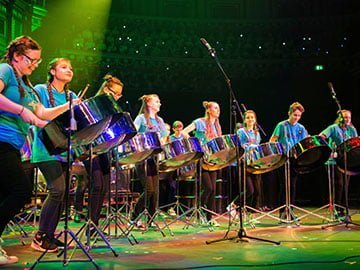