Old Blind Dogs are legendary – a multi award winning band with a line-up from the world of Scottish folk music that is approaching superstar status. Twice winners of the prestigious Folk Band of the Year at the MG ALba Scots Trad Music Awards, founder member Jonny Hardie (fiddle/vocals) is joined by Aaron Jones (guitar/bouzouki/vocals), Ali Hutton (pipes) and Donald Hay (percussion). Together they create a sound that is uniquely Old Blind Dogs and which still stands at the forefront of the Scottish roots music revival. It’s fair to say that their style, drawing as it does from the rhythms of Middle Eastern, rock, reggae, jazz and blues music went on to influence many bands but nobody does it like the Dogs!

“They really understand musical storytelling, and know how to hold our attention, riveted, to each twist of the story.”
fROOTS 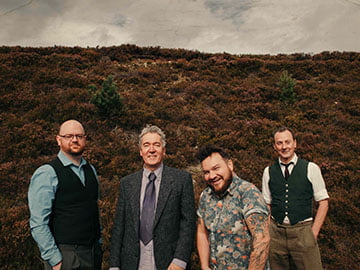