With a personal invite from Billy Bragg to play Glastonbury, sessions on BBC 6 Music and Radio 2, a five star live review and feature in The Guardian, culminating in one of MOJO’s Folk Albums of the Year award for groundbreaking album The Hum,  O’Hooley & Tidow are regarded as lionhearted trailblazers of contemporary music and songwriting. Having the originality and skill to invite comparison with the most celebrated harmony duos, from early Simon and Garfunkel to the iconic Kate and Anna McGarrigle, Belinda and Heidi’s powerful, deeply moving, and at times spine-tingling performances are infused with an honesty and empathy that will disarm even the hardest of heart.

Me!! Been under the doctor for a few weeks (getting a bit heavy now) so looking forward to this fab night out 💖

Who’s going to the Halifax concert ??

Got mine! Something to look forward to through chilly times xx

I’ll be there...in spirit! Why couldn’t New York City be but a short commute to England? Wishing you the best, Happy Touring.

So looking forward to this 🎩🎵😊

We can’t wait to see you perform again!

I've got mine. #smug

What time does it begin ???

How fabulous. Inversions has won ‘Best Instrumental Album of 2019’ in the Fatea Awards. Thanks Fatea and also thanks to my creative partner and producer of Inversions; Heidi Tidow. We loved making this album so much."Inversions" by Belinda O'Hooley is the Fatea Instrumental album of the year. A huge round of well deserved applause. ... See MoreSee Less

Your year just keeps getting better and better,so pleased for all three of you.

That's brilliant news! Well done to both of you! 😍 xx

So well done. Congratulations to both of you.

Congratulations! A fabulous album that speaks to the soul. I’m so glad for you both and look forward to more creative collaborations soon! 👏🏻👏🏻🥰

Congratulations 🎉 and well deserved. Inversions is a fabulous album. I love it 😊

Congratulations to you both! I love listening to this album.

Oh wow, you must be bowled over. I know I am. What a springboard for the future!

Fansastic, such a well deserved winner! I love this album....

Well done to you both.xx

Absolutely brilliant & rightly so too. Congratulations 🥳 🎉😍🥂😘 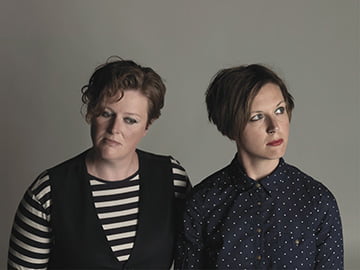