Naomi Bedford is an English roots singer from Brighton whose initial discovery, overheard singing at a party by the team from Orbital, resulted in a guest appearance on their 2001 top 20 hit ‘Funny Break’ and an appearance on Jools Holland.

Her own official debut album, ‘Tales From the Weeping Willow’ eschewed the dance/trance sound and signalled a return to her main passion of folk and country styles. Featuring guest contributions from the likes of Paul Heaton, Justin Currie, Alasdair Roberts and Paul Simmonds, it was released in 2011 to an overwhelmingly positive reaction and was described by Andy Gill of the Independent as ‘both brilliant and original in equal parts’.

Her most recent album. ‘A History of Insolence’ was released in 2014 and featured in many end of year Best Of lists including Mojo, The Guardian and Froots Magazine, culminating in a Radio 2 Folk Award nomination in the Best Original Song category, alongside her musical partner Paul Simmonds, for ‘The Spider and the Wolf’.

Naomi has performed regularly around the UK, most notably at Cambridge Folk Festival, Sidmouth Folk Festival and Celtic Connections where she was honoured to appear at the Alistair Hulett memorial concert. Naomi also appeared at Cecil Sharp House as part of the English Folk and Dance Song Society winter programme on the theme of Border Ballads. 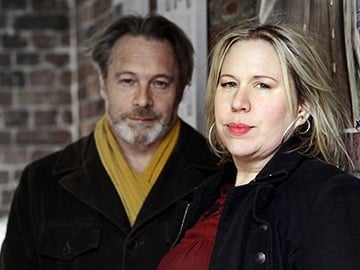