Moulettes are one of the UK’s most unique touring bands and are steadily being singled out from the wave of Bjork & Kate Bush influenced Alt.Folk artists that have arisen this decade. With Strings, Guitars, Drums, Bassoon and Synths, Moulettes’ music weaves between Indie Folk, Chamber Pop and Prog Rock to create an incomparable universe.

Renowned for their breathtaking live shows it is clear that few bands have the creative range and work ethic of Moulettes. They are constantly evolving with a brave approach to production and arrangement that seeks peculiar ways of blending acoustic and electric instruments.

We hope you are are all enjoying the new interactive website!💛If you have no idea what we're talking about, then click the link and join us in venturing into the completely interactive site for Attention: 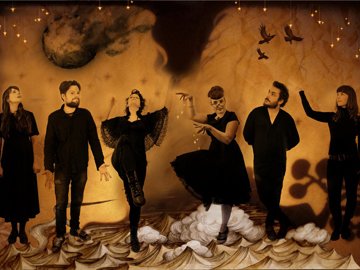