Merry Hell will be performing on Saturday 7th August and as a bonus there will be a second chance to see them perform an accoustic set the following day on the Main Stage at 13.00pm.

They are a band founded on the ever evolving Folk tradition – music made by the people and shared by the people. Though their hearts and souls are tuned to the songs which came before them, they bring you new words and music forged from their own experiences, from the lows and the loves of theirs lives. Their art is energy and their hope is unity. Their pleasure is to please, let the audience be the acid test and let the music speak for itself!

During 2014, Merry Hell played over twenty festivals, including a highlight support slot to Richard Thompson at Towersey, undertook its first national tour in Spring, a further tour in October, plus a ten date acoustic jaunt around the folk clubs and arts centres of Northern Britain.  In March, 2015 they released their third album, The Ghost In Our House and Other Stories. In 2017 they proposed an alternative National Anthem – Come On, England!  The single was released on 1st August 2017 and taken from their album Bloodlines. Words and music by Bob Kettle. 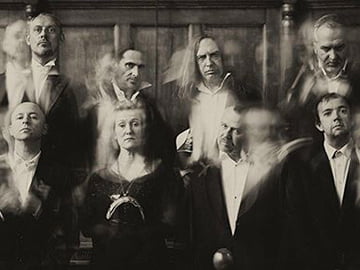