5 years on from their hat trick of BBC Radio 2 Folk Award nominations, Mawkin return with their boldest album to date. ‘The Ties That Bind’ is a veritable romp of rousing chorus songs and ballsy folk tunes played with all the verve and conviction you have come to expect from this quintet of cheeky Essex boys. The premise of the album was clear explains guitarist and singer David Delarre (Eliza Carthy, TRED) “Essentially, this albums only preconceived purpose was to simply let you have fun while trying your damnedest to find some deeper meaning. We’re not making a statement apart from don’t hurt yourself while you’re dancing in the kitchen.” The songs themselves are unapologetic, gritty tales of being tied to something, somewhere or someone, punctuated with the invigorating instrumentals that have become the trademark of Mawkin’s sound. Rousing songs of rebellion are sung by brothers David Delarre (Eliza Carthy, Tred) and fiddler James Delarre (Saul Rose & James Delarre, Topette) all underpinned by the virtuosic bellowing of Nick Cooke’s melodeon (Kate Rusby, Jim Moray) and a solid rhythm section with Danny Crump on Bass and Lee Richardson (Diverted, Extreme Music) on Drums. ‘The Ties That Bind’ is the latest step in the bands career that has seen them featured on BBC and ITV for Jools Holland and Ade Edmondson respectively, live sets on BBC Radio 2’s Bob Harris show and BBC Radio 4’s Clive Anderson’s ‘Loose Ends’ show as well as appearing at a number of high profile festivals; Cambridge Folk Festival, Larmer Tree Festival and Shrewsbury Festival. 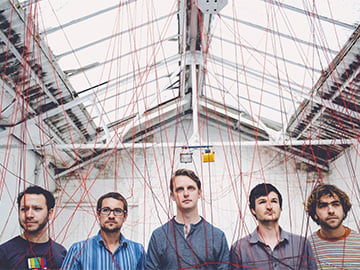