Mad Dog Mcrea raise hands, lift feet and start parties wherever they play with their dance-demanding recipe of folk, pop, rock, jazz and bluegrass. Whisking up whistles, fiddles and mandolins to spectacular and infectious effect, these musical magicians are synonymous not only with a damn good party but also with quality musicianship and the odd surprise.

Thanks to three storming gigs at Glastonbury 2013 (notably the Avalon Stage), the release of their official video ‘Happy Bus’, regular radio play by esteemed folk such as Mike Harding, and in no small part the utter dedication of their huge fan base – momentum is definitely gathering pace.

Fresh and up for it, the Mad Dogs are touring the UK throughout the whole of November 2013 (check the gig list for details) and a much-anticipated live studio album is on its way.

Mad Dog Mcrea’s name is firmly established on the live music scene, and they are in huge demand from festivals, live music venues and traffic wardens across the country. They were named ‘Best Live Act’ at the 2012 South West Music Awards, and in the same awards in 2011 their last album ‘The Whirling Dervish’ scooped ‘Best Album of the Year’. Two more nominations are secured for the 2013 awards. 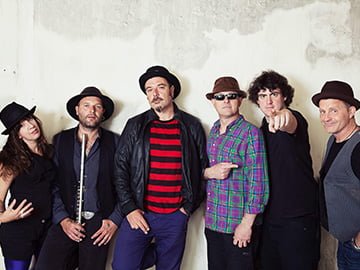