Los Pacaminos celebrate their 30th anniversary in 2022. The band appeared at our 1st Wickham Festival in 2006. Guitarist Jamie Moses was at Wickham in 2021 with The SAS Band.

The spirit of Tex-Mex lies somewhere between the Mariachi and Norteno styles of Mexico and the Country/Blues sounds of South-West America. It’s played by such luminaries as Ry Cooder, Flaco Jimenez, The Texas Tornados and Los Lobos.

We’re all seasoned musicians in our own right, but you’ll probably have heard of one of us in particular. A certain Mr Paul Young, one of the UK’s best-loved vocalists, fronts the band.

As Paul says: “Los Pacaminos started out just for fun, playing simply for the pleasure of it. It all took off from there. It’s real bar room stuff: foot stompers, not too many slow songs – a real party atmosphere.”

A typical Pacaminos set might include ‘Wooly Bully’, ‘La Bamba’ and sometimes, if enough tequila is flowing, ‘Speedy Gonzales’. 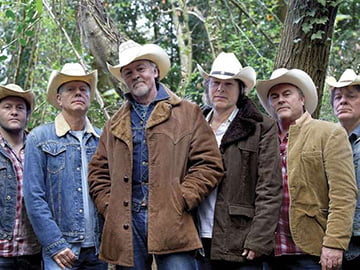