At the beginning of their career, Level 42 was squarely a jazz-funk fusion band, contemporaries of fellow Brit funk groups like Atmosfear, Light of the World, Incognito, and Beggar & Co. By the end of the ’80s, however, the band — whose music was instantly recognizable from Mark King’s thumb-slap bass technique and associate member Wally Badarou’s synthesizer flourishes — had crossed over to the point where they were often classified as sophisti-pop and dance-rock, equally likely to be placed in the context of Sade and the Style Council as was any group that made polished, upbeat, danceable pop/rock. The band’s commercial peak came with 1985’s World Machine, but they continued to record and tour sporadically throughout the ’90s and 2000s.

The Early Tapes Featuring Mark King (bass, vocals), Phil Gould (drums), Boon Gould (guitar), and Mike Lindup (keyboards), the band formed in 1979. Before they released their first single, “Love Meeting Love,” the band was pushed to add vocals to their music in order to give it a more commercial sound; they complied, with King becoming the lead singer. Released in 1981, their self-titled debut album was a slick soul-R&B collection that charted in the U.K. Top 20, resulting in the release of The Early Tapes. Level 42 had several minor hit singles before 1984’s “The Sun Goes Down (Living It Up)” hit the British Top Ten. Released in late 1985, World Machine broke the band worldwide; “Lessons in Love” hit number one in Britain and “Something About You” hit number seven in America. Their next two records, Running in the Family (1987) and Staring at the Sun (1988), were a big success in the U.K., yet made little headway in the U.S. Both of the Gould brothers left the band in late 1987; they were replaced by guitarist Alan Murphy and drummer Gary Husband. Murphy died of an AIDS-related illness in 1989; he was replaced by the renowned fusion guitarist Alan Holdsworth for 1991’s Guaranteed. The band followed Guaranteed in 1995 with Forever Now.

Retroglide Throughout the remainder of the ‘90s and the 2000s, the band’s lineup fluctuated, with King the lone constant and his brother, guitarist Nathan King, onboard since 2001. Level 42 released a studio album, Retroglide, in 2006. Four years later, the band celebrated its 30th anniversary with a special tour, as well as a box set, Living It Up, which included a disc of fresh acoustic versions recorded by Mark King and Lindup. 2010 also saw Husband leave the band once again, replaced by Pete Ray Biggin. The group continued to tour over the next few years before releasing new material in 2013, in the form of the EP Sirens. Supporting the release with an extensive tour of the U.K. and Europe, the group also recorded the live release The Sirens Tour, at their stop in London in 2015. The band continued to tour into 2016 with performances at festivals across Europe and South America. 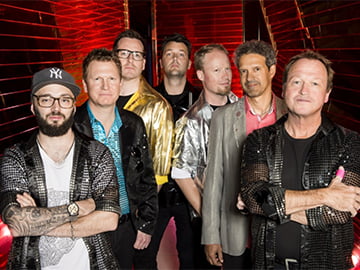 We've released the next Live Anthology album “Live At The Apollo, 2004” on streaming platforms.

Nice album and great to hear the lesser played tunes, but I miss Love Games..

I was there, absolutely stunning performance by the lads! ❤️

Another nth anthology with material released a gazillion of times.

Really adore the live version of "Love meeting love" you did, so greatly performed. Wonderful concert as any other else. www.youtube.com/watch?v=oHGcPWnJZtM

Would love this on vinyl

hope u release this on vinyl

Anything for level headed vinyl dudes?

To stay up to date with all new releases on the channel subscribe here: bit.ly/2O4Od2k ... See MoreSee Less

Apologies if you were there, but I wish the audience was livelier at this gig ! All the clips show almost nobody getting involved 😲😲 Been a fan since 1981 and by far the best gig I have been too was Albert Hall last time around, was just amazing ! Roll on next year !!!

Saw this in Milton Keynes and also on the Isle of Wight (best gig I’ve ever seen) and what a bass sound!

I remember this from the Jazz Cafe gigs. Out of this world

I wish I could erase my memory and hear Live At Reading 2001 for the first time again. 😢 The epitome of cool. 😎👍

Would love for the band to play this on their tour in 2021.

Bring back Gary Husband on drums...!!

Would be great to see on the next tour. x 👏💖

Was there that night. Great encore track! 😃

Level 42 performing 'All Over You' live at the Reading Concert Hall in December 2001.

To stay up to date with all new releases on the channel subscribe here: bit.ly/2O4Od2k ... See MoreSee Less

Whether BLACK or WHITE. Funk never dies. We live for it. An awesome track.👍👍🎸🎷🎺🥁❤️

Can’t believe it’s a year since the Wickham Festival. Great music! Thank you.

One of my favourite's. 🙏