KT Tunstall chooses to live and create in the moment. This impulsivity courses through her catalog and performances, defining classics like the GRAMMY Award®-nominated ‘Black Horse & The Cherry Tree’, ‘Suddenly I See’, ‘Hold On’, ‘Saving My Face’, and many more. This urgency also drives the Scotland-born and now Los Angeles-based songstress’ recent fifth full-length studio album KIN – released in September 2016.

“It’s rambunctious, anti-slick, pro-wild, psychedelic emotional pop,” she says of her new music. “I’m allowing these songs to misbehave while still staying rooted in traditional songwriting. I feel I’ve finally cut myself free from a disempowering, disabling search for approval which has been heavy baggage for me for a long, long time. It’s a return to a sort of innocence. I’m being honest, and I’m having a load of fun.”

She likens this journey to a “Joy-Phoenix, rising from the ashes.” 2013’s ‘Invisible Empire//Crescent Moon’ came to life during one of the most tumultuous periods of her life, as she lost her father and went through a divorce. A change of scenery proved restorative, revitalizing, and reinvigorating. “I never imagined moving to LA, but as soon as I found Venice Beach, I thought, ‘OK, I get it.’ I felt like setting my bag down. There was a balance I’d been missing between working hard and enjoying my life, and I’ve found that here.”

Fueled by a heavy audio diet of Fleetwood Mac, Tom Petty, and more recent artists such as Tame Impala and Devendra Banhart, windswept Californian psychedelica and widescreen coastal pop melodies found their way into her own repertoire. Following this West Coast muse, KT embarked on a series of writing retreats to Joshua Tree and New Mexico.

“The Southwest has a powerful pull,” she goes on. “Venice Beach, Joshua Tree, and Taos all played a huge part in how this record feels and sounds. I holed up in a beautiful Joshua Tree cabin, sat outside, and played the new songs to the rock formations and stars with a blanket around me. In New Mexico, I got up, chopped wood, built a fire, and sat there for six or seven hours a day, just writing while the snow fell.”

Returning to Los Angeles, she teamed up with powerhouse producer Tony Hoffer [Beck, Air, The Kooks] to carve out and create what she feels is her best and most visceral work to date.

“I feel that the album communicates something beyond the lyrics,” she admits. “It’s born from a very real feeling of experiencing a new life and having a wider view of that. So much has changed, and there’s a deep fulfillment in knowing that I own that change. Many of these new songs are full on in their energy. When I play, I have realized that I really have to sweat to deliver what I’m best at – which is going out on stage and creating a physical and emotional experience for a room full of people. It’s primal, tribal, and when it’s really good, it feels transcendent. You share life together, all the good, all the bad. It opens you up.”

It’s a blossoming that began with her outstanding breakout 2004 debut, ‘Eye to the Telescope’, carried through the RIAA goldcertified ‘Drastic Fantastic’, to 2010’s unanimously acclaimed ‘Tiger Suit’, and most recently, the similarly excellently-received ‘Invisible Empire//Crescent Moon’. She won a BRIT Award, an Ivor Novello, and received GRAMMY Award® and Mercury Prize nominations. Her music has featured prominently in film and television including ‘The Devil Wears Prada’, ‘Ugly Betty’, and ‘Grey’s Anatomy’. She has penned songs for films such as Disney’s ‘Million Dollar Arm’ – co-writing with the legendary AR Rahman, ‘Winter’s Tale’ for Warner Brothers, and the soon-to-be-released, highly anticipated movie, ‘About Ray’.

Now, KT begins the brightest phase of her journey yet.

“My fans have been so brilliantly loyal,” she leaves off. “They want the truth. They’re not interested in some bullshit puppet dancing around pretending that life is a movie, they want something real. They want good songs. They want joy. They want to feel. That’s what I’m giving them on this album.” 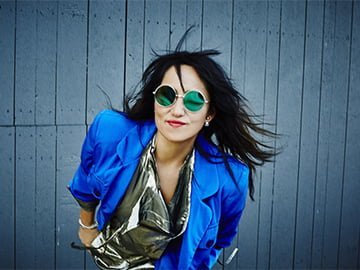 I'm taking part in Passport: Back to Our Roots, a nationwide series of one-off intimate gigs, supporting the independent grassroots venues that form the foundations of the UK’s live music scene.

In 2021, I'll play the Windmill, Brixton and PJ Molloys, Fife - dates TBC, to happen once we can do proper shows again post-social distancing!

For a minimum donation of £5 donors will be entered into a prize draw to win entry to the event for themselves and a guest. Entries will open on 14th September 2020, with all money going direct to help grassroots independent venues.

Crossing fingers. Seeing you and the Family in Scotland is my top bucket list event. Want to say thank you in person. 🙏💜❤💙💚💛🧡🧶

Son of a gun, I wish you could be here in Columbus Ohio. We could use some Tunstall power right about now, god everybody could.

Another great cause. Registered and reminder set for entering. 🤞🤞🏴󠁧󠁢󠁳󠁣󠁴󠁿🙌

Your are so amazing.! You understand the pulse of the music industry, understand how it ticks and have never forgotten your humble beginnings.Your a diamond, uncut but precious to me. Best wishes from Platform one video Production in Edinburgh Scotland Ken Moir Producer and Director..your a gem.xxx Good night Mini..woof woof.!

For those who don’t know, PJ Molloys is in Dunfermline. ❤️

Alan Saint, you in? You better be!

HEADS UP! Thursday September 10th I will be hosting #musicwithmeaningfestival - an online music festival celebrating the positive effect that music can have upon our mental wellbeing.

Thank you for sharing your time, kindness, and positivity for this event. 🙏💜❤💙💚🧡💛

Fab-tastic. I look forward to your fantastic vocals; Kate. Simply the best!!x😊💋

Music is a powerful source of healing. Thanks for hosting this KT. ❤️❤️❤️

Can’t wait! This is going to be fabulous!

Rae Louise get on it 🙌