Hailing from the South Coast of England, Kodiak Jack are a five piece hard rock outfit consisting of Bryn (vocals), Jeff (lead guitar), Jon (guitar & backing vocals), Keiran (drums) and Kev (bass).  They will be headlining in The Quay West Cave on Friday.

Their debut album ‘Your Death: My Glory’ was released in late 2011 and gained critical acclaim across the board with Classic Rock, PowerPlay and FRONT magazine amongst those that hailed its release. Radio airplay followed and BBC Introducing, along with many National and Regional stations all picked up on the catchy hooks and driving riffs that define the album. ‘Wasted Youth’ featured on a ‘Best Of British’ CD featured on an international edition of Metal Hammer, ‘Waves’ was used on the closing credits for Eurosports British Superbikes coverage and no less than five tracks were featured on Rumble Rides: Muscle Drag DVD that was released in the USA.

January 2013 saw the band invited to record with Brian Wheat, bassist with US Rock Gods, Tesla. Laying down eleven tracks including reworked versions of ‘Wasted Youth’, ‘Crossfire’ and ‘Waves’, at the request of Brian, the new album was recorded and mixed at J Street Studios in Sacramento over a four week session.

Christened ‘Alhambra’ (in honour of the street the studio backs onto) the album was released in the Summer of 2014 and features the singles ‘Brother’ and ‘Wasted Youth’, both of which received heavy rotation on the ‘New Rock Show’ on Planet Rock with the former making it into their Round Up Of The Year show at the end of 2013.

Once again the album received strong reviews across the board with Classic Rock, Big Cheese Magazine and Power Play Magazine amongst those hailing the release. The band then took to the road once more as they continued to cement their reputation as a formidable live act with appearances at Victorious Festival and supporting Tesla at the O2 Islington among the highlights. 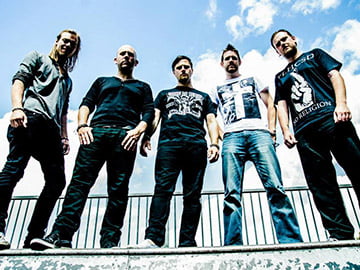