In 1988 Simon Edwards (ex. Boothill Foottapper) and some pals in Chaddar put together an accordian-led folk rock band called K-Passa, with the expectation of having a bit of fun – now, they enjoy an enviable reputation of being THE live band to see in the South West of England.

Local recognition led to their appearance on the main stage at the 1992 Glastonbury Festival. Their blend of Folk, Cajun, and Rock wins a grassroots response to their fiery performances, and has garnered this UK-based folk/roots rock band a huge audience following across Europe and the UK.

Recently reformed, with a new rhythm section, Edward’s voice, songs and accordion playing are still the foundation for K-Passa’s position as a favourite live folk-based act in Bristol, England.

“With their shiver up the spine mix of Cajun Reggae & Rock, the audience had no chance but to leap around in a frenzy to the hypnotic grinding of K-Passa” – Folk Roots 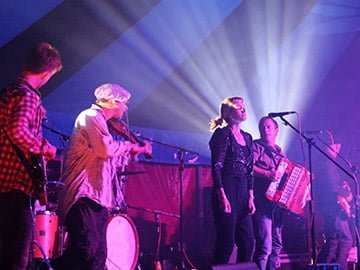