Well just think we give you something different, perhaps totally unique and different Just Millie is a 5ft tall one man band using acoustic guitar, harmony looping pedals and an electronic kick drum to accompany her, creating a full and rich sound. She will be headlining in The Quay West Cave on Thursday.

The 19 year old South Coast based artist Just Millie released her debut single ‘Spanner In The Works’ charting at No.13 in the iTunes Singer/Songwriter listings, rubbing shoulders with hits from George Ezra, Ben Howard and Ed Sheeran. 2014 saw performances in NYC, French Alps and at many major UK Festivals. 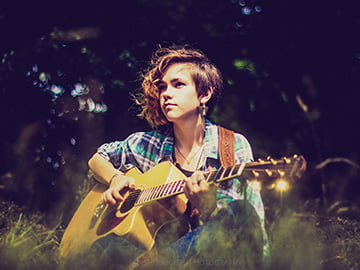