Jon Benns will be our compère for Stage 2 at Wickham Festival 2021 across all days.  He fell in love with acoustic music in his early teens, much to the chagrin of his parents and the posh public school which he turned his back on.

Throughout the 1980s he toured endlessly as the opening act to numerous rock bands such as Camel, Barclay James Harvest, Steeleye Span etc.
At the same time he was presenting Folk and Rock Music programmes on local radio throughout southern England.

Health issues and exhaustion forced Jon to quit performing in 1990. Since then he has worked as an agent, stage manager, compère, tour manager and sound engineer. Current clients include Gilbert O’Sullivan and Phil Beer from Show Of Hands.

Jon is delighted to be compère for Stage 2 at Wickham Festival and is looking forward to meeting up with friends both old and new. 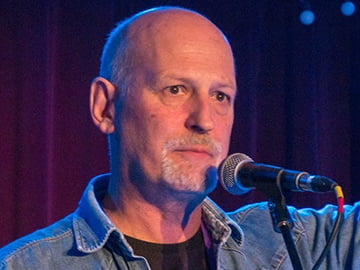