John Jones, the charismatic lead singer of award-winning Oysterband, has been an avid walker for many years. “I had the crazy idea of walking to gigs a few years ago and somehow managed to persuade reluctant musicians and a smiling but sceptical agency to help. Rushing from gig to gig, crowded motorways, increased stress levels and time wasted staring out of tour bus windows at inviting hills rolling by just made me think: walking 20 miles, setting up in a pub, church, canalside…anywhere…was worth trying as a much-needed alternative. It caught people’s imagination...”

John Jones and the Reluctant Ramblers will lead a Thursday daytime walk on the beautiful South Downs prior to the opening of Wickham Festival 2019 and then play a set that evening. What a great way to kick off our weekend!

Starting in 2009, John combined his love of walking with his music and led a group of walkers and musicians from his home on the Welsh Borders, via the Wychwood Festival in Cheltenham, to the Big Session Festival then in Leicester. They walked during the day and either played a gig or enjoyed their own session in the evening.

Other walks followed: in 2010, from Lyme Regis, along the Wessex Ridgeway, to the Larmer Tree Festival; in 2011 the “Spine of England” tour with the mid-point being the Shepley Festival; in 2012 saw two walks, the first in June from the original site of the Big Session to that years festival at Catton Hall, the second in July along part of the Ridgeway in Berkshire then along parts of the White Horses Trail in Wiltshire leading to the Village Pump Folk Festival in Westbury.

The main walk in 2013 was the “Song of the Downs” tour, covering the South Downs Way from Eastbourne to Winchester – seven gigs and just over 100 miles in seven days – and there was also a day’s walk as part of the Kington Walking Festival, to the source of the River Arrow. 2014 saw three walks: “Two Moors, Two Seas” – the main walking tour over the week of the late May bank holiday, in Devon, crossing the county from north to south; plus shorter walks into two festivals, Wickham and Shrewsbury where John is a patron.

In 2015, following his return from illness, John led two walks: the first was a “Return to the Ridgeway” and followed by “October in the Lakes“, 3 walks, a house concert, a session and a “Big Gig” over 3 days in the Lake District.

Towards the end of 2013, John was delighted to be asked to be President of The Powys Ramblers Association.

In the gigs and sessions at the end of a days walking, John and the Reluctant Ramblers musicians perform songs from his two solo albums Rising Road and Never Stop Moving. 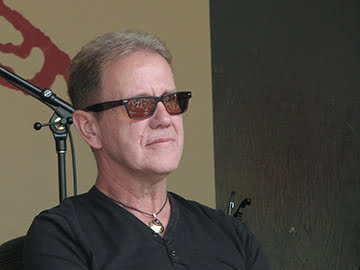