We are very excited to announce that John Illsley of Dire Straits will be performing at Wickham on Saturday 4th August 2018. As one of the founding band members of Dire Straits, with guitarist brothers Mark and David Knopfler, and drummer Pick Withers, Illsley played a role in the development of their sound. By the time the group disbanded in 1995 changes in personnel meant that Illsley and lead singer Mark Knopfler were the only two original band members remaining.

John has also produced two albums of his own with Mark as a guest performer, and has helped with many of Mark’s personal projects. They remain good friends and in 2012 John presented a Sky Arts TV programme called “Guitar Stories”. Along with Mark the pair discuss the six guitars that defined their sound…

During their time together as Dire Straits they sold over 120 million albums and toured extensively across the world. When Dire Straits took a couple of well-earned breaks John released two albums; Never Told a Soul (1984) and Glass(1988). Both featured Mark Knopfler as a guest musician.

He has received many BRIT and Grammy Awards, Heritage Award and played arenas across the world. In 2005 John happened upon the Irish band Cunla in a Leicestershire pub. He appeared with them on several occasions, most notably on 23 September 2006 at Cathedrale d’Image in Les Baux de Provence, France. The performance was recorded and subsequently released as an album, Live in Les Baux, in 2007.

In October 2008 John released Beautiful You, an album with Greg Pearle from Cunla and followed the release with a a short tour of Ireland. May 2010 saw the release of Streets of Heaven, with appearances from Mark Knopfler and a host of other musicians. The album was recorded at British Grove studios and produced by John and Guy Fletcher.

John signed Native Roses to his label, Creek Publishing, in February 2011. He produced their debut album alongside Guy Fletcher between December 2011 and July 2012.

When Dire Straits finished touring in 1993 John became heavily involved in the Art world. Having carved a reputation for himself as a painter, John had solo exhibitions in London, New York, Sydney and across Europe. He also co-founded the children’s charity Life Education in 1987 which recently was integrated into Coram, one of the oldest UK charities.

Whilst being recognised as a bass guitarist, after Dire Straits he’s also proved himself playing lead guitar…

His collection of guitars include, 1962 Gretsch Country Gentleman (acquired from The Who’s John Entwistle), 1964 Gibson ES-335, 1960 Fender Stratocaster (Mark Knopfler signature), 1965 Fender Telecaster and his constant 1963 Fender Jazz Bass. To date (2017) he hasn’t changed the strings on his 1963 Fender Jazz Bass in over 30 years.

John will be joined on stage by legendary guitarist Robbie McIntosh whose career includes spells as guitarist with Sir Paul McCartney, Sir Tom Jones, John Mayer, and Norah Jones. Robbie has played many of the world’s top festivals and venues. Among his numerous TV and radio appearances, Robbie was with Sir Tom Jones on Jools Holland’s Hootenanny BBC TV show on New Years Eve 2015, and with Zucchero in 2016. As a long-term member of The Pretenders, Robbie played at Live Aid in 1985 and on their top-10 UK hit, Don’t Get Me Wrong.

To say there are some classic 1980s rock tracks for John to choose from at Wickham is a massive understatement.  Watching his live band production of any of these will be a highlight next summer.  Here’s hoping…

John also owns a pub, the East End Arms in the New Forest which has been listed by critics in The Times newspaper as one of the “Fifty Best Pubs Around Britain”. 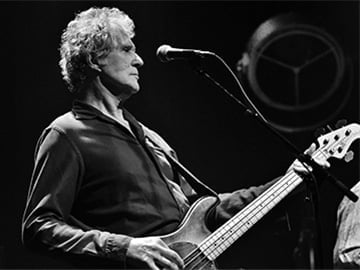