The Faces broke up in 1975 and Rod Stewart started his own band.​ ​One of the most influential guitarists in this line-up was Jim Cregan. Now, more than 40 years on, Jim, together with four outstanding musicians, performs that well-loved heritage music under the name ‘Cregan & Co’.  Forming this band gave him the opportunity to play live the songs he had written, recorded and co-produced with Rod Stewart. In January 2013, Roger Chapman agreed to reform Family for two concerts in London at the Empire Shepherd’s Bush. This coincided with Family winning Classic Rock magazine’s “Spirit of Progressive Rock” Award. He also joined a reformed Family for the group’s final shows in late 2016, part of a line up that only included Chapman, Poli Palmer and Cregan from the band’s 60s and 70s output.

“If you can’t afford my ticket go see these guys…they’re just as good and half the price!” – Rod Stewart 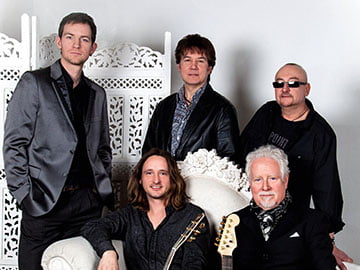