Mabon was formed from two families in 1999, playing homespun arrangements of Welsh folk dance tunes in the pubs and ‘twmpath’ dances of their native South Wales.

Cut to Lorient, in Brittany, France – home of the gargantuan and internationally renowned ‘Festival Interceltique’. Every summer for a decade, in the early stages of their gestation, the band performed prolifically in the fringe here, and their growing prowess and skills became a legend in the ‘off-festival’ bars and cafes over the years.

It was a thrilling and brutal training ground in equal measure, where non-stop hard work, abundant hasty set-ups, fierce competition and, of course, relentless performing helped hone their individual ability, and define the band’s musical identity.

All the while, Jamie was soaking up musical styles from the Celtic diasporas and, combining all these elements, grew into a serial tunesmith and eminent instrumentalist.

Their repertoire moved more and more towards Jamie’s original tunes, and from the launchpad of Lorient, they went far and wide during the next ten years – collecting as they went a growing and fiercely loyal fanbase (as well as a fantastic collection of stories, from shows in surreal circumstances and unusual situations!).

Mabon’s reputation grew from outside the UK at first – with performances across three continents and in front of huge festival crowds – until 2009 when the band’s first major tour across the UK, and their 2010 ‘Live at the Grand Pavilion’ album, shot them into a different orbit of recognition. As fROOTS wrote: “Being a bit slow on the uptake, I have only just managed to see them play live. Now I get it. This seems to be a default position for most”.

The last ten years has seen the band climb a steady path to global recognition; some opportune and mighty live shows and festivals enabled the band to showcase their pedigree – and audiences were stunned and confused as to where a band with so much ‘chutzpah’ could have appeared from, without ever being heralded in the way that the media like to announce the future of up and coming bands.

A change of name; some personnel changes; a string of tours; more festivals and more albums; these things all continued to sharpen the band’s abilities and evolve their playful style. Awards appeared, ever more distant shores were reached – and 20 years on, the band is burning brighter and more vibrantly than ever before. No flagrant media hyping, no fast-track to success, just a band of talented companions who make friends with audiences at every show they play, and seemingly never let them go.

The proverbial steady ‘slowburn’ success – an overnight sensation twenty years in the making! 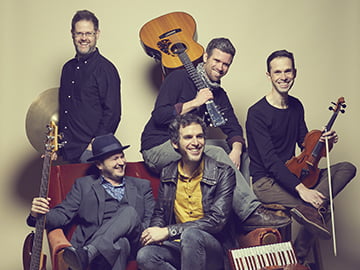